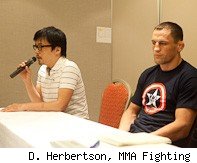 Stepping in on two day's notice will be long-time Deep and Pancrase veteran Eiji Ishikawa (22-16-2) - a fighter that Zaromskis apparently knows "zero" about.

"There's not a lot of things to say," said a nonchalant Zaromskis. "I landed and they first told me there would be an opponent change. I was surprised but [there's] nothing I can do. Change is change - I came here to Japan to fight. If [Sakurai cannot fight], I'll fight another person. I'm not really disappointed. If I had no [opponent], then I'd be disappointed but I have an opponent so at least I can fight."

Given that he is coming into the bout on short notice, Ishikawa is unable to make the 76 kilograms (168 lbs.) weight limit and so the bout shall be contested at a catchweight.

DREAM's second event for the year, originialy title DREAM.17, received another blow earlier this week when Todd Duffee was injured and forced out of his bout with Nick Gaston.