Fight of the Half-Year: Ladies and Gentlemen, We Have a Draw 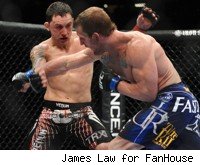 Right away I'll admit it: what I am about to do is kind of a copout. It shouldn't be allowed, and maybe it isn't. It is, however, kind of justified when you really think about it, and I feel confident that if you'll just give me a second to explain, you'll see why I had to do it this way.

It started with a simple assignment. I was tasked with picking the best fight of the first half of 2011 and writing an article all about it, exalting its awesomeness while preemptively shooting down any naysayers who might not agree.

The problem was that I couldn't choose just one, because already this year we've had two fights that were both unbelievably great, but for very different reasons. So screw it. I'm declaring a tie, and giving the award to both fights.

Choosing the best fight is a little like choosing a favorite movie. 'Lawrence of Arabia' might be an emotionally moving journey into another time and place, but sometimes you just want to throw on 'This is Spinal Tap' and shut the old brain off for a few hours.

That's why, in the category of Fight of the Half-Year, I offer you two winners: Frankie Edgar vs. Gray Maynard, and Nick Diaz vs. Paul Daley.

What it comes down to, I think, is what goes through your head as you're watching these two fights. And which one you prefer probably says something about you.

For instance, Edgar-Maynard (II) at UFC 125 on January 1 was supposed to be the snoozefest to end all snoozefests. That's more or less how it went down the first time they met, so that's what most people were expecting for the second go-round. Only now, with the belt on the line, we'd have to sit through two more rounds of it. I recall looking forward to it only in the way that you look forward to a night of dreamless sleep.

Then Maynard blitzed Edgar in the first round, and Edgar defied all logic by not only surviving the onslaught, but coming back strong in the second round. Before I knew it there was a legitimately great fight on my television, and it raged on for five full rounds.

It felt a little like begrudgingly accompanying a date to the ballet, only to sit down in the theatre and have someone announce that all the ballerinas had suddenly fallen ill, so they'd decided to screen 'Die Hard' instead. It was difficult, if not impossible to separate the feeling of excitement from the feeling of relief.

Somehow, these two were really going at it, and the result was a brilliant nail-biter of a fight that almost fittingly ended in a draw. Neither man deserved to lose, and yet it seemed unfair that neither guy could call himself the winner after it was over.

I guess it's also slightly unfair that they don't get sole ownership of the Fight of the Half-Year, but that's where Diaz and Daley come in.

Nothing about this fight at the Strikeforce event in San Diego in April evoked the gentlemanly sort of pugilism you hear about from the great fights of a century ago. This was a bar brawl, but between two of the men you'd least want to bar brawl with.

It started at the weigh-ins. After weeks of mediocre build-up during which neither man could find much to say about his opponent, Daley suddenly remembered that he preferred to hate the man he was about to fight. He hurled some obscenities at Diaz, who has never needed much of an invitation to hurl a few obscenities of his own. Just like that, we had ourselves some bad blood.

Once the fight actually began, I don't think a single person in the San Diego Sports Arena (or whatever they call it now) breathed for the next five minutes. If Edgar-Maynard was a five-round seesaw of a fight, this was a brutally quick chainsaw. Daley dropped Diaz, then Diaz dropped Daley. They both fought like two men who were racing each other to the after-party.

It was only in the last few seconds of the first round that Daley tried to rise to his feet only to discover that he was no longer on good terms with his legs. He toppled to the mat and Diaz pounced, adding just enough punches to get the stoppage with three seconds left before the bell. It was more of a backstreet drag race than a Formula One event, but in all the best possible ways.

So yes, it's a tie between these two. One was a back-and-forth battle that turned out nothing like we expected, and the other was a heart-pounding sprint that was more or less exactly what we expected, only more so. One had all the technical bells and whistles of big-time MMA, and the other seemed like a fight where someone could have picked up a broken bottle or a pool cue and it wouldn't have seemed out of place.

Both were thrilling, memorable nights. Both deserve to be recognized. Both are going to have to be satisfied with a tie, even though no one in the history of MMA ever has been. I still say it's fair. Even if it is a copout.