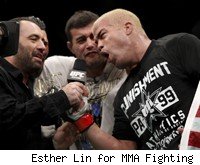 There was once a time when Tito Ortiz losing a fight would have been considered a major upset. But the world of mixed martial arts has changed significantly since then – roughly 2004 – and now, just seeing Ortiz fight on schedule without pulling out with an injury is a bucking of the odds.

Despite his lofty status as the most dominant light heavyweight champion in UFC history, and one of the sport's most popular – and often polarizing – figures, Ortiz entered his fight with Ryan Bader at UFC 132 as a more than 5-to-1 underdog. Odds as high as -825 for Bader and +525 for Ortiz are usually reserved for fights like Alistair Overeem vs. James Thompson. But Ortiz was such a long shot for plenty of reasons.

Ortiz hadn't won a fight since 2006, the last of his three wins over Ken Shamrock. In fact, Ortiz's last four wins came against Shamrock twice, who has gone on to be irrelevant at best in major MMA, and a pair of split decisions. Ortiz has battled injuries and surgeries. He's battled highly publicized personal problems at home and with the UFC. And against Bader, he was fighting a better wrestler eight years his junior whose only loss came to Jon Jones.

So it should come as no surprise that Ortiz's win is the 2011 Upset of the Half-Year. The fact that it came in such astonishingly dominant fashion is icing on the cake.

Ortiz entered the fight earlier this month with his back against the wall. UFC president Dana White made no bones about it – if Ortiz lost to Bader, it was the final straw, and he would have been cut. But Ortiz has claimed for years that he hasn't been fighting healthy, and has pointed to the fact he hasn't been finished and has been competitive, even though his hand hasn't been raised.

While there were no doubt optimists who could envision a scenario in which Ortiz could grind out 15 minutes against Bader and steal a couple rounds to save his career and pull a shocker, next to no one could have predicted he would level Bader with a right, pounce on him and sink in a guillotine that would have Bader tapping – and less than 2 minutes into the fight. Bader had only been stopped once, and it took Jones more than 9 minutes to do it.

2. Antonio Silva over Fedor Emelianenko, Strikeforce: Fedor vs. Silva, Feb. 12
Sometimes, upsets have less to do with betting lines and more to do with historical significance. Just going off the numbers, Fedor Emelianenko's February loss to Antonio "Bigfoot" Silva might not warrant No. 2 status – he came in as high as -525 to Silva's +325 at some books. Fedor's loss to Fabricio Werdum was arguably the biggest upset of 2010. When the Russian got back on the horse as part of Strikeforce's heavyweight grand prix tournament, the masses expected a revitalized Fedor, hungry for redemption. What they got, instead, was a severe beatdown from Silva, who used a relentless ground-and-pound attack, as well as a lengthy side choke, in the second round that led to a doctor stoppage. Considering Fedor's dominance over a nearly 10-year stretch without a loss, back-to-back losses were once unthinkable. Though the legend briefly mentioned retirement, he will now fight light heavyweight champion Dan Henderson in a superfight at the end of this month – and he enters as a more than 2-to-1 favorite.

3. Charlie Brenneman over Rick Story, UFC on Versus 4, June 26
If this was a list of of crazy stories of the half-year, this one takes the cake. Charlie Brenneman rode an emotional roller coaster, and his prize when he got off was a big upset of Rick Story. Brenneman was scheduled to face TJ Grant on the prelims, but an illness forced Grant out just four days before the fight. With no time to find a fill-in, Brenneman, a Pennsylvania native who was going to be fighting in his home state for the first time in the UFC, saw his fight scrapped. But when Nate Marquardt now infamously was shelved the day before the fight for elevated testosterone levels, Brenneman got the call to face Rick Story, who was riding a six-fight winning streak – one of the best in the welterweight division. Brenneman had already finished a training camp, was on weight, was back on the card – and was elevated from prelims to the televised show on Versus in the co-main event. But with late notice, and an opponent on a hot streak working against him, Brenneman came in +425 to Story's -650 from some oddsmakers. Brenneman used a superior wrestling game to control Story in the first two rounds, and he survived two armbars and a triangle from Story in the third to win on the cards and pull the upset. If it's any consolation to Story, just a month earlier he pulled a decent upset, himself, winning a decision over Thiago Alves at UFC 130 as a 2-to-1 'dog.

4. Dennis Siver over George Sotiropoulos, UFC 127, Feb. 27
George Sotiropoulos had plenty going for him heading into UFC 127. He was fighting in Sydney, in his home country of Australia, for starters. And he had never lost in the UFC – he was riding a seven-fight winning streak in the promotion with five finishes and three Fight of the Night awards. But Siver, who had gone 5-1 in his second stint in the UFC after going 1-3 his first time around, was a more-than-game opponent despite entering a more than 3-to-1 underdog to Sots' -525. Siver dropped the Aussie twice in the first round and stuffed all 13 of Sots' takedown attempts to win a unanimous decision in hostile territory. The loss was a major setback for Sotiropoulos' near-term hopes for a title shot in the lightweight division. His second straight loss, to Rafael dos Anjos by knockout at UFC 132 earlier this month, was another upset setback.

5 (tie). Dustin Poirier over Josh Grispi, UFC 125, Jan. 1
Josh Grispi can be thankful he's not No. 1 on this list. But the bad news is, he makes the list twice. Grispi was, momentarily, the top contender for Jose Aldo's featherweight title and was booked for a shot at the belt at UFC 125. But when Aldo had to pull out with an injury, Grispi stayed on the New Year's Day show to fight Dustin Poirier in what most assumed was little more than a stay-busy fight until Aldo was ready. "The Diamond," a +250 underdog to Grispi's -350, had other plans. He dominated Grispi in the standup game, outstriking him 106-35, including a first-round front kick that dropped "The Fluke." Though Grispi had chances in the first and second rounds for submissions, Poirier fended them off and delivered a major setback to Grispi's featherweight title hopes.

5 (tie). George Roop over Josh Grispi, TUF 13 Finale, June 4
After his jaw recovered from the beating he took from Dustin Poirier in January, Josh Grispi hoped to get back in the win column and start the climb back up the ladder toward a title shot with Jose Aldo. George Roop came in a +400 underdog. With Grispi at -600, few were giving much of a shot to Roop, who has been up and down in his WEC and UFC career. But unfortunately for Grispi, Roop was back up on this night. After a close first round, Roop dominated in the second, then again in the third before landing a massive right hand to the stomach that knocked Grispi out with a body shot.