Tito Ortiz Turns Down Opportunity for Rematch With Rashad Evans 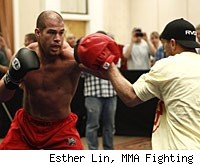 With the UFC on the hunt for a replacement for the injured Phil Davis, they turned to Tito Ortiz first.

And Ortiz said no.

The news comes straight from UFC president Dana White, who responded to a text from MMA Fighting about Rashad Evans' likely UFC 133 opponent by saying that Machida had not yet agreed to the fight, and Ortiz had declined the opportunity.

"Tito turned it down," he told MMA Fighting.

Ortiz is coming off his first win in nearly five years, defeating Ryan Bader via first-round guillotine choke at UFC 132 on July 2.

An Ortiz-Evans fight would have been a rematch of their September 2007 fight, which ended in a controversial draw. Ortiz has previously said he hoped to have a chance to face Evans again, but with less than four weeks to prepare, he declined the opportunity.

Late Tuesday, Ortiz explained via Twitter why he turned down the fight against Evans.

"I have a life and things to take care of," he wrote. "The fight game is about making the right choices [in] my career. If you knew what I have been going through you all would understand. Peaking for a fight is what makes a fighter unstoppable! Timing is everything in life. This is a rebuild year for me, not do or die. The time will come again! #positive."

The search continues for an opponent for Evans. White told MMA Fighting that the UFC would offer the fight to Machida, but he would be faced with the same reality: fighting on short notice.

A Machida vs. Evans fight at UFC 133 would also be a rematch; they first squared off at UFC 98, with Machida knocking out Evans in the second round to capture the UFC light-heavyweight championship.

For now, Evans remains alone, waiting for an opponent to accept the fight.

As first reported by MMA Fighting, Davis was knocked out of the August 6 main event in Philadelphia after suffering a knee injury.