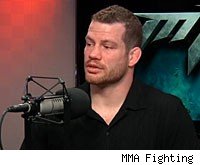 With his suspension likely to end any day now, Nate Marquardt is the biggest name in MMA's free agent market. One possible landing spot could be Bellator Fighting Championships, where middleweight champion Hector Lombard has repeatedly pleaded for a fight with Marquardt.

Officially, the company will not comment on any interest in Marquardt just yet, but in a recent interview with Sherdog, Lombard claimed that Marquardt was offered an immediate title match against him and declined.

According to two sources inside the organization though, that claim is false. While there may be interest in Marquardt, he would not be granted a title shot upon his entry into the promotion. Company CEO Bjorn Rebney has always been adamant in his belief that a tournament format is the best way to determine a top contender, and he has not wavered in that stance.

"Bjorn has never, and will never, offer a fighter an immediate title shot," a high-placed company source told MMA Fighting.

Bellator is currently ramping up for its fifth season of fights, which opens on September 10. The promotion will hold another middleweight tournament, with the winner to challenge Lombard.

Among those in the eight-man tourney field are Alexander Shlemenko, Bryan Baker, Vitor Vianna, Jared Hess, Brian Rogers, Sam Alvey and Zelg Galesic. That leaves one slot available in the field.

A longtime middleweight star, Marquardt began the drop to welterweight for his eventually scrapped fight with Rick Story in late June. Even after being released from the UFC following his inability to gain a therapeutic use exemption for testosterone replacement therapy, he has maintained that his MMA future lies at 170 pounds.