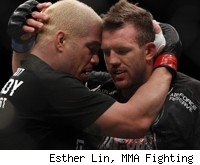 In 2008, Ryan Bader won The Ultimate Fighter. In 2009, Bader won two fights against relatively easy opposition. In 2010, Bader won two more fights, now against tougher opposition, and he was widely regarded as one of the Top 10 light heavyweights in MMA and one of the best prospects in the sport heading into 2011.

But now he's 0-2 this year, having been finished first by Jon Jones and then by Tito Ortiz. And that raises questions about whether Bader was overrated by those of us who rank fighters, and pushed into fights he wasn't ready for by the UFC.

In hindsight, Bader surely wasn't ready for an opponent of Jones's caliber: Bader simply isn't on that level. But at the time, it seemed like a reasonably fair match-up of two young prospects. And the Ortiz fight was just one of those things that sometimes happen in MMA, as Gus Johnson might say: Bader was heavily favored in what seemed like a good win to get him back on his feet, and instead Ortiz put a beating on him. No one saw that coming.

In any event, Bader was overrated, and as we re-shuffle our list of the Top 10 light heavyweights in MMA, Bader's name no longer appears.

Top 10 Light Heavyweights in MMA
(Editor's note: The fighter's ranking the last time we did light heavyweights are in parentheses).

1. Jon Jones (1): Is it possible that we'll someday view Jones as similar to Bader in having been built up too much, pushed too hard and overrated at a young age? Maybe, but I doubt it: Jones is much more dominant than Bader ever was, and doing it at a younger age. But we'll learn a lot about Jones when he defends his light heavyweight title for the first time against Rampage Jackson.

2. Shogun Rua (2): Shogun's oft-injured knees are a concern, but he has a big opportunity to bounce back from his loss to Jones and avenge his loss to Forrest Griffin at UFC 134.

3. Lyoto Machida (3): There's no word yet on when or where we'll get to see Machida again, as all of the other top light heavyweights in the UFC are booked against another opponent. The best thing for Machida to do may be to stay in shape and hope someone drops out of one of the other big light heavyweight fights coming up.

4. Rashad Evans (4): Evans will finally return after more than 14 months off when he takes on Phil Davis in the main event at UFC 133. A win there would likely earn him a title shot, but then again his win over Rampage Jackson last year was supposed to earn him a title shot, and he found out the hard way that being crowned the No. 1 contender doesn't necessarily get you in the cage with the champion.

5. Rampage Jackson (5): At age 33 and with questions about his motivation, I don't think Rampage is as good a fighter as he used to be. But he has an enormous opportunity to prove me wrong when he takes on Jones in September.

7. Forrest Griffin (8): After missing all of 2010, Griffin looked very good in his 2011 debut against Rich Franklin. He's got a tough draw in his next fight, heading to Brazil to take on Shogun.

8. Phil Davis (10): Davis is getting a big step up in quality of competition when he takes on Evans at UFC 133. If Evans tears Davis apart we might say that Davis was, like Bader, pushed too hard, too soon. But I think Evans is a challenge Davis is ready for.

9. Thiago Silva (6): Silva's admission that he cheated to beat Brandon Vera, and his suspension for taking performance-enhancing drugs, raise interesting questions about the rankings: I don't believe in just dropping Silva completely and pretending he doesn't exist, because he will be back in the UFC and he will be in significant fights in the light heavyweight division. On the other hand, Silva got a bump in the rankings for the beatdown he put on Vera, and now that that fight is considered a no contest rather than a win, we have to look at it differently. I've settled on No. 9 as the spot to rank Silva, but I understand why some have him higher, lower or not ranked at all.

10. Rafael Cavalcante (NR): Feijao backs into the Top 10 with Bader's exit. There's no word yet on when he'll return to the Strikeforce cage, but a rematch with Mike Kyle would make a lot of sense.