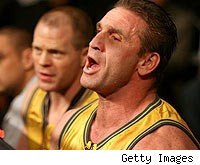 I first met Ken Shamrock about five years ago when we were both new hires at the now-defunct International Fight League. He was the coach of the brand new Nevada Lions team; I was the organization's staff writer and web editor.

I think both of us had our doubts about how long our respective jobs would last, but we both needed the money and it beat working a real job.

I remember one day in Los Angeles we sat down together in a hotel conference room and, as we talked about Randy Couture's recent knockout loss to Chuck Liddell and Kazushi Sakuraba's repeated attempts to bandage himself together well enough to keep climbing into the ring, Shamrock laid out in surprisingly eloquent fashion exactly why most great fighters continue on too long.

At the time, Shamrock was in his early forties and was coming off his fourth straight loss. He still had a variation on the same bodybuilder's physique he'd always had, but the skin around his swollen biceps no longer stretched taut and when you got close to him you could see where the old scars intersected with the new ones in his leathery face. If he realized that the picture of stubborn desperation he'd just been describing could have easily been a self-portrait, he gave no indication of it.

Now Shamrock is 47 years old, embroiled in a game of diminishing returns with his MMA career, and more than a little angry at the media members who have criticized his decision to keep entering into bouts like his upcoming tilt with former boxing champ James Toney.

In a video interview with FightHype.com, Shamrock described the MMA media as a bunch of "pen-pushers" who have no idea what it's like to be on the inside of the cage.

"You're talking about competitors, guys that challenge themselves every single day in the gym. They get up in the morning and they live and breathe this stuff. And you've got writers sitting on the sidelines, criticizing warriors. How does that pan out? I'd like to grab a pen and poke them in the eye."

The thing is, aside from from the fact that none of us use pens to do our jobs (laptops, baby, laptops), Shamrock has a point. We don't know what it's like. Neither do the vast majority of fans. And even those of us who have trained and competed still have no better notion of what it's like to be a working professional than a guy who played high school football does about what it's like to play in the NFL.

We certainly have no idea what it's like to be where Shamrock is, in the darkening twilight of a career that saw him go from MMA pioneer to UFC Hall of Famer to yesterday's hero to cautionary tale.

No one's saying they think that's easy to live with, and it's not hard to understand Shamrock's frustration with people telling him he should stop doing the one thing he's organized his life around. But when Shamrock compares the people telling him to stop to doctors who refuse medication to an older patient, it's clear that he's completely missed the point.

For one thing, no one needs MMA to live, just as no one is entitled to an MMA career. But more importantly, people aren't telling him to stop because they dislike him or don't care about him. It's just the opposite. It's because he was an early MMA legend that fans and media hate to see him debasing himself in one sad spectacle after another, and putting his health at risk in the process.

It's not just about Toney. Randy Couture fought Toney in the UFC, and that was decent enough entertainment for most. But since his win over Kimo Leopoldo in 2004, Shamrock has won just two fights in the intervening seven years. Neither of the fighters he beat was particularly noteworthy or competitive, and Shamrock tested positive for steroids after one of those wins, so it's hard to argue that he's pursuing a serious career at this point.

What Shamrock is doing now is getting paid the only way he knows how. He needs the money, so he's going out and fighting for it. As long as promoters and fans are willing to pay him to do it, he'll probably keep at it, and that's his choice to make.

No one is saying Shamrock can't fight (although eventually an athletic commission might); all they're saying is that they don't want to see it anymore, at least not now that he's become an almost grotesque imitation of the fighter he once was.

And yeah, that's rough. That's also the world of pro sports. Football players get waived. Baseball players get sent down to the minors. Nobody gets to keep going on indefinitely simply because he wants or needs to. Shamrock doesn't have to like the criticism he gets in the press, but he should at least realize that it's not done out of malice.

Criticism is part of the media's role. If every post-fight column did nothing but praise fighters for trying so hard and being so brave, readers and writers alike would all lose interest in a hurry. Fighting is like anything else: there are good performances and bad performances, and no one is under any obligation to pretend, for the sake of someone's feelings, that one is the other.

It is somewhat selfish of us to want Shamrock to stop just because we don't like seeing him go on like this. He's the one taking the punches and doing the work, so shouldn't he be allowed to keep at it for as long as he can stand it? Maybe. But that doesn't mean everyone else has to agree that it's a good idea, or that they have to shut up about it if they think it's a bad one.