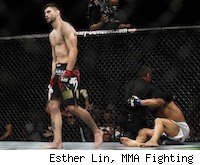 The UFC is targeting a fall matchup between top five welterweight contenders Carlos Condit and BJ Penn, putting aside for now thoughts of a potential rematch between Penn and Jon Fitch.

Both sides have been approached about the fight and have shown interest.

Condit, a winner of four straight fights, agreed to the bout immediately, and publicly challenged Penn to accept, tweeting to Penn, "The people have spoken [BJ], they want to see us scrap. Let's give 'em what they asked for."

The date, according to a source with knowledge of the situation, is not a lock, but the matchup is the desired goal of the UFC.

It was originally believed that a Penn vs. Fitch rematch was the intended direction of the promotion. The two fought to a draw in the main event of UFC 127, and afterward, UFC president Dana White indicated that a rematch was possible.

Now, it looks like Penn and Condit will square off instead.

The 27-year-old Condit (27-5) is coming off a spectacular first-round knockout of previously unbeaten Dong Hyun Kim at UFC 132. Condit has won 12 of his last 13 fights overall, losing only in a controversial split-decision to Martin Kampmann in April 2009.

Meanwhile, Penn hasn't fought since the February draw with Fitch. Prior to that, he returned to the welterweight division with a 21-second knockout of Matt Hughes in November 2010.

It appears the frontrunner for the Condit-Penn bout is UFC 137, which will take place on October 29 at the Mandalay Bay Events Center in Las Vegas. On that card, welterweight champion Georges St-Pierre will take on Nick Diaz. It's likely that on the same night, Condit will have a chance to earn a title shot with a win over the legendary Penn.