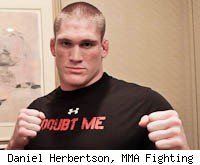 Todd Duffee, holder of the record for fastest knockout in UFC history, has been forced out of his anticipated July 16 DREAM Fight For Japan: Bantamweight Japan Grand Prix Finals bout with recent King of the Cage title contender Nick Gaston due to an undisclosed injury.

Duffee was seeking to bounce back from his 19-second loss to Alistair Overeem on New Year's Eve at Dynamite. Duffee's scheduled opponent, Nick Gaston, has also been pulled from the card.

The July 16 "Fight for Japan" charity event, originally titled DREAM.17, is still set to feature Gegard Mousasi and Hiroyuki Takaya defending their DREAM belts against Hiroshi Izumi and Kazuyuki Miyata respectively while Hideo Tokoro and former DEEP ace Masakazu Imanari will square off in the finals of the Bantamweight Japan GP. The full card is after the break.