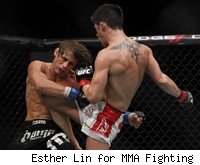 When you're shelling out oftentimes hundreds of dollars for tickets, or north of $50 for pay-per-views, or paying cover charges and overtipping waitresses in orange booty shorts, nothing else leaves a bad taste in your mouth on Fight Night like a dud of a main event. Your appetizer and the ambience might be otherworldly, but the best loaded baked potato on the planet can't change the fact that your steak tastes like a shoe.

It's what takes a pretty-good-so-far card like UFC 130 and turns it into a late sucker punch to the gut. After a pair of exciting finishes and a big upset to open the pay-per-view, fans were treated to Frank Mir over Roy Nelson and Quinton "Rampage" Jackson over Matt Hamill in lopsided snoozefests that made them forget all about the good stuff leading up to the lackluster.

WIth a title fight that could have gone either way each round, a major career-saving submission upset, a likely retirement bout and four big knockouts, UFC 132 is the 2011 Event of the Half-Year.

(Admittedly, we're cheating just a little bit since UFC 132 happened on July 2, and July is the start of the second half of the year. But since Fight Week for the event started in June, we're counting it in the first half. Plus, it had enough awesome sauce to practically allow us to count it in 2010 if we wanted.)

When Rafael dos Anjos knocked out heavy favorite George Sotiropoulos just 59 seconds into the first round in the Spike TV opener, the media in Press Row likely started writing their post-fight bonus stories with dos Anjos as the Knockout of the Night winner. Until Melvin Guillard starched Shane Roller in the next fight.

And the pay-per-view opened with a third straight knockout when Carlos Condit landed a flying knee that was the beginning of the end of Dong Hyun Kim's career unbeaten streak. Three straight first-round knockouts, all televised? That's pretty hard to top.

But Tito Ortiz found a way. Winless in nearly five years, and without a submission since – wait for it ... wait for it ... 2000 – yes, 2000! – Ortiz, an underdog of as high as +525 to Ryan Bader's -825 at some online sportsbooks, pulled a career-saving rabbit out of his hat. Knowing he would be cut from the UFC with another loss, one of the most popular fighters in MMA history dropped Bader with a right hand, pounced on him and quickly transitioned to the guillotine that would end the fight 1:56 into the first round. Ortiz quickly proclaimed he was back, as did Dana White. His next fight may tell that tale more accurately, but for one night, anyway, Ortiz had fans and haters alike with their jaws on the floor.

After a Fight of the Night-candidate win by Dennis Siver over Matt Wiman that had many in the crowd and online crying foul for a bad decision – FightMetric scored the bout for Wiman despite Siver leading in total strikes for the fight 128-34 – a legend returned after a long layoff, only to be staring at a permanent layoff less than 30 seconds later. Chris Leben put Wanderlei Silva's lights out 27 seconds into the co-main event, and White said that was likely the end of the line for Silva. The winningest fighter in Pride history has lost six of eight, including four by knockout.

Though it didn't feature a big upset or a highlight-reel finish, the main event bantamweight title grudge match between champ Dominick Cruz and Urijah Faber, the only man to ever beat Cruz, was the kind of fight that was anyone's guess how the scores would come in. While Cruz landed with more frequency, Faber seemed to land the more memorable big shots. And when the scores were announced, they were as erratic as any unanimous decision in recent memory: 50-45, 49-46, 48-47, all for Cruz. Thought the scores indicate it was closer to a rout than a neck-and-neck battle, the first main-event lighter weight title fight in UFC history definitely put more casual fans on notice that the little guys deserve the big stage.

2. UFC 129, April 30
Largest attendance, largest gate, largest bonuses – everything about UFC 129 in Toronto was big. And though the welterweight title fight between champion Georges St-Pierre and Jake Shields took some criticism for being a boring fight, the event still had plenty of memorable moments. Lyoto Machida sent Randy Couture into retirement with a leaping front kick knockout. Vladimir Matyushenko, at age 40, knocked out Jason Brilz in 20 seconds. Jose Aldo defended his featherweight title and gave Mark Hominick a hematoma for the ages. John Makdessi stopped Kyle Watson with a spinning backfist KO. Though not every fight was a home run, collectively the UFC's first stadium show knocked one out of the park.

3. Strikeforce: Fedor vs. Silva, Feb. 12
The first event in Strikeforce's eight-man heavyweight grand prix tournament opened with a split decision on the prelims. After that, we never saw a third round. Six of the next nine fights ended in the first round. There were five submissions (one from strikes), two heavyweight knockouts and a pair of doctor stoppages. And while the star power in the first four main-card fights on Showtime wasn't overpowering, it's hard to argue four first-round stoppages on the excitement meter. Valentijn Overeem submitted Ray Sefo with a neck crank. Chad Griggs stopped Gianpiero Villante with strikes. Shane Del Rosario armbarred Lavar Johnson. And in the first tournament quarterfinal, Sergei Kharitonov upped Andrei Arlovski's skid to four with a big knockout of the former UFC heavyweight champ. But it was the main event between the legendary Fedor Emelianenko and Antonio "Bigfoot" Silva that makes this card the most memorable. Fedor went nearly 10 years without a loss before Fabricio Werdum submitted him in 2010, so losing two straight seemed unthinkable. But when Silva battered the Russian legend until doctors said he could no longer see and stopped the fight after the second round, the once-impossible became a reality.

4. UFC on Versus 4, June 26
The UFC's fourth Versus card and Pittsburgh debut will forever be remembered for the Nate Marquardt incident, in which the former middleweight challenger was grounded by the Pennsylvania State Athletic Commission the day before the event for elevated testosterone levels and a subsequent firing by Dana White. But many of the fights on the card made fans forget about the 11th-hour main-event change. Pat Barry dominated Cheick Kongo, nearly finishing him in the first round – until Kongo managed to stay on his feet and knock Barry out in one of MMA's all-time great comebacks. Matt Mitrione had what he no doubt thought was a $50,000 bonus winner with his walk-off knockout of Christian Morecraft – until his buddy Barry went to sleep courtesy of Kongo. But the "Story" that was slightly overshadowed by the new main event was Rick Story, who saw his lead bout against Marquardt changed to a co-main event against Charlie Brenneman, who took the fight on truly short notice. Brenneman stopped Story's six-fight UFC winning streak, overcoming underdog odds of nearly 5-to-1 in the process, with a unanimous decision victory. After the card, White said the event was one of the best in the UFC's history.

5. UFC 125, Jan. 1
The first card of the year had plenty of highlights, not the least of which was the split draw between Frankie Edgar and Gray Maynard in their lightweight title fight. That bout featured an amazing comeback by Edgar just to stay in the fight, let alone with the last four rounds on one judge's card, after a dominant first from Maynard. Brian Stann stopped the red-hot Chris Leben with a first-round TKO. Clay Guida won his third straight fight, and third straight by submission, when he stopped Takanori Gomi in the second round. There were several notable upsets on the prelims, including Jacob Volkmann over Antonio McKee, moments before his life changed with a call-out of President Barack Obama; Diego Nunes over former featherweight champ Mike Brown; and Dustin Poirier sending Josh Grispi's featherweight title hopes into a freefall with a dominant decision win. Though several planned fights for the New Year's Day card fell out, including Shane Carwin-Roy Nelson and Jose Aldo-Grispi, UFC 125 still got the MMA new year off to a good start.