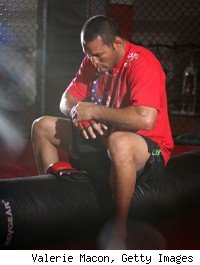 And now Henderson is preparing to fight Fedor Emelianenko in the final fight of his Strikeforce contract -- a fight that could position Henderson to negotiate a new deal with Strikeforce's new parent company Zuffa, owners of the UFC. But while a win over Emelianenko could launch Henderson directly into a UFC pay-per-view main event, Henderson says his preference is to stick with Strikeforce.

"I hope not," Henderson said when asked by MMAFighting.com whether the fight with Emelianenko would be his last in Strikeforce. "It's the last one on my contract (but) I like Strikeforce, and I do like fighting on Showtime. ... I don't have any plans of leaving. I don't want to leave."

As Henderson sees it, a return to the UFC is possible after his July 30 fight with Emelianenko -- but not immediately after. Instead, Henderson wants to defend the Strikeforce light heavyweight title, firmly establish himself as the top 205-pounder outside the UFC, and then take on the UFC light heavyweight champion.
[Jon Jones] would be fun for me because he's so unorthodox. But it's something that probably needs to be built up after I defend the belt once or twice.
-- Dan Henderson
"I'd like to defend that belt and then possibly have a match with whoever's the UFC champ," Henderson said. "I think that's where the potential to both make a lot more money and have a lot more fans watch both Strikeforce and the UFC."

Henderson says he's already hearing from fans who want to see him fight UFC light heavyweight champion Jon Jones, but Henderson believes the best way to market that fight is for him to beat Emelianenko and beat a Strikeforce light heavyweight or two first.

"As soon as Zuffa bought Strikeforce, Jon Jones fought right after that and everybody was blowing up my Twitter about fighting Jon Jones," Henderson said. "That would be fun for me because he's so unorthodox. But it's something that probably needs to be built up after I defend the belt once or twice."

That's music to the ears of Scott Coker, who still oversees Strikeforce even after the promotion was sold to the UFC. Coker says he likes the idea of UFC vs. Strikeforce battles, but he doesn't want to diminish the importance of Strikeforce belts by having every champion bolt for the UFC. Instead, Coker wants to see champion vs. champion fights only after the two promotions' champions have separated themselves from the rest of their divisions.

"He's our light heavyweight champion, so we'll have more fights for him," Coker said of Henderson. "Strikeforce has a good light heavyweight division. King Mo is going to come back at some point, Roger Gracie is rising, Gegard (Mousasi) is still in the mix, Mike Kyle -- people underestimate Mike Kyle."

"It's a good possibility that will happen and it's something I would like to happen as a fan," Coker said. "These are fights that can be big pay-per-views, big business."

The chance to return to the Octagon for a pay-per-view main event is something that greatly appeals to Henderson, and he thinks the sale of Strikeforce to Zuffa could be profitable for him for that reason. But he also acknowledges mixed emotions about that sale, and he says he worries about young fighters who might have a harder time negotiating a good deal for themselves now that the UFC and Strikeforce are part of the same corporate family.

"It does make me nervous," Henderson said. "Originally I thought it wasn't the best thing for a lot of the up-and-coming guys who don't have any drawing power to bargain with."

For now, Henderson says, he's happy to take the biggest fight he can in Strikeforce, against Emelianenko, who despite having lost two straight fights remains the biggest draw Henderson could face. Ultimately, what Henderson wants is to participate in big fights, and that's why he jumped at the chance when told that he could fight Emelianenko.

"It was something that was interesting to me," Henderson said. "That could possibly make everyone a lot of money."