Robbery of the Half-Year: Nick Ring vs. Riki Fukuda 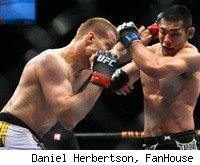 Nothing seems to get a fight fan more riled up than an unjust decision, and perhaps rightfully so, considering there's so much on the line between whose hand is raised and whose isn't.

There are times when fights are close and any objective witness are hard-pressed to single out a winner. Those results are understandable. For "Robbery of the Half-Year," we'll look at the the top cases where there's a clear victor in a fight -- and somehow he's not the one walking out of the cage with a W.

One of the criticisms of MMA judging is the high value of takedowns even if it leads to little offense. In a rare exception to the observation, Riki Fukuda lost to Nick Ring despite completing five-plus takedowns (FightMetric counted six, CompuStrike five) to Ring's zero. But takedowns withstanding, Fukuda on a round-by-round basis also landed more damaging strikes and only fell short to Ring when it came to leg kicks. The first round was close enough you can make a case for Ring, but should have at least taken this fight two rounds to one.

While Keith Jardine should be applauded for fighting his heart out on a week's notice against a prime Gegard Mousasi, this was a fight Mousasi should have won. Mousasi battered Jardine with superior striking through three rounds, leaving the former UFC contender's face in a bloody mess. And according to the stats, Mousasi outscored Jardine in total strikes 58 to 3 on FightMetric and 45-20 on CompuStrike. Mousasi's weakness was once again his takedown defense, but there was little damage done when Jardine was on top. Two of the judges gave Mousasi two of three rounds, but since Mousasi was deducted a point in the first for an illegal upkick, those two scores were turned in as 28-28s. Mousasi arguably should have won all three rounds as one of the judges scored it. What separates this particular from the other bad decisions though is that Mousasi may have been "robbed" of a win, but at least he wasn't handed a loss either.

While compiling "bad" decision candidates for this list, there were several fights that on repeated viewings didn't turn out to be the "robberies" that one may initially see them as.

Joe Warren beats Marcos Galvao via unanimous decision (29-28, 29-28, 30-27)
Joe Warren is no stranger to close decisions, but none was more controversial than his decision win over Marcos Galvao in a catchweight bout. Galvao stuffed takedowns and even took top position against the wrestler in the first round. The first round was all Galvao, and so was the second, arguably. The final round was definitely Warren's, so it really came down to the close second round. Looking at the CompuStrike numbers after the fight, Warren actually landed more even though it might have seemed Galvao was winning the standup battle. With that said, one of the judges scored it 30-27 Warren, which is mind-boggling.

Darren Elkins beats Michiro Omigawa via unanimous decision (29-28, 29-28, 30-27)
Maybe the universe balancing itself out for Michihiro Omigawa's win over Hatsu Hioki at Sengoku 11, but Omigawa arguably deserved the nod over Elkins at UFC 131. Fans in attendance and UFC president Dana White were immediately outraged when Elkins was announced as the winner. To the judges' defense, the first two rounds are closer under repeated viewings. According to FightMetric, Elkins landed more total strikes, even though Omigawa landed more significant ones, but you can at least see why the judges gave the first two rounds to Elkins. The one explicable scorecard was judge Dave Hagen's 10-9 for Elkins in the third round. That one was clearly Omigawa's and the final stanza probably played a part in the cries for robbery from how dominant Omigawa was in the final minutes.

Diego Sanchez def. Martin Kampmann (29-28, 29-28, 29-28)
Just by looking at the before and after pictures, Kampmann was the winner of the fight, but we're not judging a beauty contest here. When it comes to statistics, although the two statistical providers' numbers don't always match, both FightMetric and CompuStrike gave this Fight of the Year candidate to Kampmann. To Sanchez's credit, he fought his heart out and his best round was the third and final one. In the first round, Sanchez was completely dominated on the feet and Kampmann stuffed takedown after takedown, but taking a closer look at the last two rounds, you can at least see why the judges gave it to Sanchez even if you felt Kampmann deserved the nod. Interesting to note, although UFC president Dana White cried foul after the Ring-Fukuda and Elkins-Omigawa fight, he was fine with Sanchez's win.