MMA Top 10 Middleweights: Sonnen Is Back, Wanderlei Is Gone 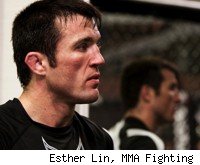 The last time we ranked the middleweights in mixed martial arts, Wanderlei Silva appeared to be near title contention, and Chael Sonnen's future looked murky. That was less than a month ago, but things change quickly in this sport.

Now Silva appears to be at the end of the line, and Sonnen will be getting back into the Octagon soon.

Silva is nowhere to be seen in my latest middleweight rankings after his knockout loss to Chris Leben at UFC 132, and UFC President Dana White has said he thinks Silva is finished completely. Meanwhile, the California State Athletic Commission says it's OK for Sonnen to start fighting again, and Sonnen's return has been scheduled.

Our latest rankings, with Sonnen in a strong position and Silva off the list, are below.

Top 10 Middleweights in MMA
(Editor's note: The individual fighter's ranking the last time we did middleweights are in parentheses.)

1. Anderson Silva (1): The best fighter on the planet returns to fight in his native Brazil for the first time in almost eight years when he takes on Yushin Okami at UFC 134.

2. Chael Sonnen (2): With his California suspension behind him, Sonnen is now free to fight again, and he's booked to fight Brian Stann next. Whatever else Sonnen does, the UFC would love to see him win his comeback fight so it can book him in a rematch with Anderson Silva.

3. Vitor Belfort (3): Belfort gets Yoshihiro Akiyama at UFC 133 in August as he tries to bounce back from his UFC 126 loss to Anderson Silva. Akiyama is a solid opponent, but one Belfort should beat comfortably.

4. Yushin Okami (4): Okami could shock the world and completely shake up the middleweight division with an upset of Silva in Brazil, but you'd be hard-pressed to find anyone who actually believes that's going to happen. Much more likely is that Silva will get his revenge on Okami, who won by controversial disqualification when these two fought in 2006.

5. Mark Munoz (5): Munoz earned by far the biggest win of his MMA career when he beat Demian Maia, and it may be time to start wondering if he's capable of being a future title contender. Since dropping down to middleweight two years ago, Munoz has gone 6-1, with the only loss coming by split decision to Okami.

6. Demian Maia (6): A Maia-Sonnen rematch could make a lot of sense. Maia submitted Sonnen in the first round of their 2009 fight, and a rematch would be just the kind of test that would force Sonnen to prove he has improved his submission defense.

8. Chris Leben (NR): The headlines coming out of UFC 132 were more about Wanderlei losing than about Leben winning, and that strikes me as a little unfair. Leben has won four of his last five fights, and all four wins have been decisive. He's a real force in the middleweight division.

9. Ronaldo Souza (8): Jacare's problem is the same as the problem for virtually every fighter outside the UFC: In order to be considered one of the best fighters in the world, you have to beat high-quality opponents. But in Strikeforce, there aren't many high-quality opponents for Jacare to fight. Jacare is expected to defend his Strikeforce middleweight title against Luke Rockhold -- who's not even in the Top 25, let alone the Top 10 -- in September.

10. Michael Bisping (10): Bisping will coach against Jason "Mayhem" Miller on the next season of The Ultimate Fighter, then fight Miller in December. This may be Bisping's last, best chance to prove he's worthy of fighting for the middleweight title some day.