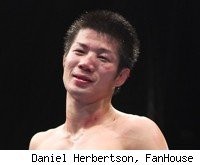 Newly signed Japanese featherweight Hatsu Hioki has been penciled in to make his UFC debut at UFC 137. The promotion announced on Saturday that Hioki would face George Roop at the Las Vegas event on October 29.

Hioki, who boasts a 24-4-2 record, is considered by most to be among the world's top featherweights.

A winner of four straight, the 27-year-old Hioki has spent almost his entire career fighting for Japanese promotions, though he has fought a handful of times in Canada. He is currently riding a four-fight win streak and holds two wins over recent No. 1 contender Mark Hominick. He also has career victories over Marlon Sandro, Ronnie Mann and Rumina Sato.

During his career, Hioki has won some of MMA's most prestigious 145-pound championships, including the Shooto and Sengoku titles in Japan. With Sengoku in dire financial trouble, he recently vacated their belt to sign with the UFC.

Roop (12-7-1) is coming off a third-round TKO victory over Josh Grispi at June's Ultimate FIghter 13 Finale.