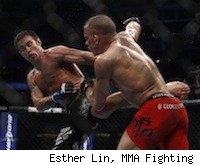 With 36 days between UFC events, these are the dog days of summer for many fight fans who anxiously await their next fix. The long break, however, give us plenty of time to look back on what's happened so far in the MMA world.

In just over six months, we've already experienced quite a bit. We've watched the rise of Jon Jones, accepted the retirement of Randy Couture, witnessed Tito Ortiz resurrect a career on life support, and marveled at the biggest event in UFC history.

Some of those highlights, and a few lowlights are presented here in a look at 2011's statistics, facts and figures thus far.

Odds & Ends
• Despite his dry spell, Ortiz doesn't have the longest time between wins in UFC history. That record belongs to Dan Henderson, who went 3,767 days between wins at UFC 17 and UFC 88
• There's been only 1 catchweight fight in 2011 (Nick Catone def. Constantinos Philippou at UFC 128)
• On March 26, 2011, Chan Sung Jung pulled off the first successful Twister submission in UFC history, forcing Leonard Garcia to tap out
• Three fighters have scored 2 knockouts apiece in 2011: Brian Stann, Melvin Guillard and Matt Mitrione
• Ryan Bader is the only fighter to be stopped twice in 2011, both via submission
• Mike Brown lost twice in a 21-day span, dropping decisions at UFC 125 on Jan. 1 and Fight for the Troops 2 on Jan. 22
• Daniel Roberts is the only UFC fighter to compete three times in 2011; he's 1-2
• UFC 129's $12,075,000 gate accounts for 35.7% of UFC's gate receipts for the entire year
• The rear naked choke has been the most popular submission finisher of 2011, closing out 9 fights; the guillotine is just behind with 8 finishes
• 42 out of 147 fights ended in the first round (28.6 percent); only 28 were finished in the second and third rounds combined
• With his win at UFC 129, Georges St-Pierre earned his 16th career octagon victory, tied with Chuck Liddell and Randy Couture for second all-time (Matt Hughes has the most, at 18)
• With his win at UFC 126, Anderson Silva won his 13th straight UFC fight, extending his own record. Royce Gracie is second with an 11-fight win streak
• With his next fight, Tito Ortiz will grace the UFC octagon for the 25th time, which will be a new record. He is currently tied with Hughes and Couture.
• In losing at UFC 127, Chris Lytle tied Tank Abbott for most losses in UFC history with 10
• In losing at UFC 129, Randy Couture was stopped via KO or TKO for the sixth time, one more than fellow former champions Chuck Liddell and Evan Tanner for most all-time
• There have only been two draws in UFC championship fight history. Both have come in the lightweight division (Penn vs. Uno, UFC 41 & Edgar vs. Maynard, UFC 125)