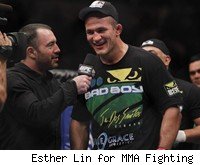 Top heavyweight contender Junior dos Santos led all fighters on the card with a $200,000 payday for his main-event unanimous decision win over Shane Carwin, who earned $40,000 in the loss. And co-main event featherweight Kenny Florian made $130,000 for his win over Diego Nunes, who collected $12,000.

Other top earners on the card included main-card middleweight Mark Munoz, who pocked $60,000 for his close and hotly debated decision win over Demian Maia, who made $43,000, and Donald "Cowboy" Cerrone, who made $40,000 to beat promotional newcomer Vagner Rocha ($6,000).

The three top winners on the card – dos Santos, Florian and Munoz – made up nearly half of the disclosed total $782,000 payroll with a combined $390,000 in fight purses.

With his dominant win over Carwin, dos Santos earned a shot at heavyweight champion Cain Velasquez's title, a fight expected for November. Carwin stepped in for former champ Brock Lesnar on a month's notice when Lesnar withdrew to have surgery for a recurring bout of diverticulitis. dos Santos and Lesnar coached opposite each other on Season 13 of the Spike TV reality competition "The Ultimate Fighter" and were expected to fight in the traditional post-season coaches showdown.

Florian's win was his debut at featherweight, making him the first UFC fighter to compete in four weight classes in the promotion. Florian's UFC career started at middleweight on Season 1 of "The Ultimate Fighter." He dropped to welterweight for two fights after the show, then moved to lightweight, the division he spent five years in before cutting to featherweight. At lightweight, Florian twice fought for a UFC title and twice lost – to Sean Sherk at UFC 64 and BJ Penn at UFC 101. In his home city of Boston at UFC 118, Florian lost a top contenders fight to Gray Maynard, who went on to get a shot at Frankie Edgar's title. With his featherweight win over Nunes, UFC president Dana White said Florian could be in line already for a shot at Jose Aldo's 145-pound belt.

In addition to the contracted fight purse amounts, four fighters were given $70,000 bonuses by UFC president Dana White for their performances. Fight of the Night went to Dave "Pee Wee" Herman and Jon Olav Einemo for their main-event slugfest. Knockout of the Night went to Sam Stout, one of four Canadians on the card, for his first-round starching of Yves Edwards. And Submission of the Night was given to Matt Serra protege Chris Weidman, who moved to 2-0 in his UFC career.

Highly touted heavyweight newcomers Herman and Einemo didn't fare poorly by UFC debut standards. Herman made $36,000 for his comeback knockout of the Norwegian, who made $15,000. And Stout made $38,000 to knock out Edwards – and when factored with his $70,000 bonus check, he became the third highest-paid fighter on the card. The bonus check was Stout's fourth in his last five fights and sixth overall in the UFC.s

The purses (show money/win bonus) are listed below. They do not include post-fight bonus totals, non-disclosed "locker room" bonuses or any sponsorship monies.