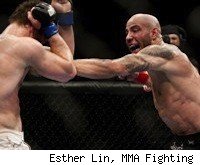 The welterweight tourney will open with quarterfinal round action on Sept. 10, at an event held at Caesers in Atlantic City, New Jersey.

Among the group are several Bellator veterans.

The first round matchups are: Saunders vs. Hawn, Dan Hornbuckle vs. Luis Santos, Douglas Lima vs. Steve Carl and Brent Weedman vs. Chris Lozano.

Last season's tournament came down to Hawn and Jay Hieron, with Hieron winning in a tight split decision. The loss was the first of Hawn's career. Hieron is currently awaiting his reward, a title match against current champion Ben Askren. A date for that fight has yet to be finalized.

Hawn (11-1) won't have an easy time getting back to the finals, starting against the 28-year-old Saunders, who has won two straight since being released from the UFC. Saunders (10-3-2) made his Bellator debut in April, earning a TKO win over Matt Lee.

Also new to the tournament field is Lima, who is riding a six-fight win streak in pushing his record to 18-4. Lima had been the reigning champion of the Canada-based promotion Maximum Fighting Championships, but vacated the belt to move to Bellator.

Santos is the final newcomer to the field, boasting a 49-6-1 record in a decade-long career.