MMA Top 10 Bantamweights: Should Faber, Bowles or Johnson Be Next? 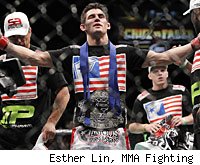 If it wasn't clear before, it's certainly clear now: Dominick Cruz is the best bantamweight in mixed martial arts.

Cruz handled his latest challenge, Urijah Faber, at UFC 132, and he has now won nine straight fights while beating most of the sport's other top bantamweights. The only question is whether his next fight should be against Demetrious Johnson, a rematch with former champion Brian Bowles or a third fight with Faber.

I vote for Johnson, for reasons that I'll lay out as I run through the top 135-pounders in mixed martial arts below.

2. Brian Bowles (4): Bowles could make a good case that he deserves to be next in line for Cruz: He's the former champion who lost his title to Cruz when he suffered a broken hand in their fight and had to quit, and after beating Takeya Mizugaki at UFC 132, Bowles is the No. 2 bantamweight in the world, at least in my book. But considering that Cruz was comfortably beating Bowles before Bowles had to stop in their previous fight, I would like to see Bowles show more improvement before he gets another chance with Cruz.

3. Urijah Faber (2): A third Cruz-Faber fight would be the best call for the UFC if it wants to maximize the pay-per-view revenue in its next bantamweight title fight: The cheers for Faber and boos for Cruz at UFC 132 made clear that Faber remains the sport's most popular little man. But I didn't think this fight was close enough to merit giving Faber an immediate rematch, and I'd like to see some new blood get a shot at the bantamweight belt.

4. Joseph Benavidez (3): He's a great fighter, but Benavidez doesn't have many places to go as long as 135 pounds is the UFC's smallest weight class: He's already lost twice to Cruz, so he isn't going to get another title shot. If the UFC ever adds a 125-pound flyweight class, Benavidez will be that division's best fighter.

5. Demetrious Johnson (5): Johnson can make a very good case that he's the most deserving of the next title shot, as he's the highest-ranked bantamweight whom Cruz hasn't already beaten. I also think Johnson's quickness and his impressive takedowns are two attributes that could cause Cruz some stylistic problems. The biggest question is whether Johnson, who suffered a leg injury in his victory over Miguel Torres in May, will be healthy soon enough to get the next shot at Cruz.

6. Scott Jorgensen (6): After losing to Cruz in December, Jorgensen bounced back nicely by knocking out Ken Stone at the Ultimate Fighter Finale in June. I think it would make a lot of sense to put Jorgensen in the Octagon with Miguel Torres next.

7. Miguel Torres (7): After starting his MMA career by winning 37 of 38 fights, Torres has now lost three of his last five. He's on the down side of his career, but I still think he has a few big fights left in him, and I'd love to see Torres take on Faber next.

8. Brad Pickett (8): Pickett was originally slated to fight Torres at UFC 130 before pulling out of the fight with a back injury. Pickett has been talking himself up as a contender for Cruz's title, but he'll need to win at least one more fight before he gets that chance.

9. Eddie Wineland (9): Wineland, the former WEC bantamweight champion who gave Faber a tough fight in March, will return to the Octagon to take on Benavidez in August.

10. Renan Barão (10): Since losing his professional MMA debut in 2005, Barao has gone 26-0 (with one no contest). But he hasn't faced much high-quality opposition during that impressive run. I've got Barao in the Top 10, but I can't move him much higher than this until I see how he looks against a Top 10 opponent.