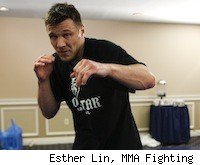 Continuing a long trend of stepping into fights on short notice, Dan Miller has accepted a UFC 134 bout with Rousimar Palhares, after Palhares' original opponent Alexandre Ferreira was removed from the bout for undisclosed reasons.

The UFC confirmed the change on Wednesday afternoon.

Miller is coming off a unanimous decision loss to Nate Marquardt at UFC 128 in his home state of New Jersey. Marquardt had been expected to face Yoshihiro Akiyama at the event, but Akiyama withdrew after an earthquake and tsunami devastated his home country of Japan. Miller stepped into that fight with just one week's notice.

Prior to that, Miller had won two straight fights, with a decision win over Joe Doerksen and submission victory over John Salter. The latter of those two fights was again a short-notice bout, with Miller replacing an injured Phil Baroni.

Palhares is attempting to win his second straight after defeating Dave Branch via submission in March. Palhares is 12-3 in his career, and has won four of his last five UFC bouts.

This is the second time a Palhares-Ferreira bout has been called off. The two had been expected to fight in March, but Ferreira pulled out six weeks before that, after floods in Brazil resulted in casualties to his friends and family.