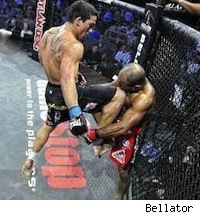 Patricio "Pitbull" Freire, the flashy featherweight who qualified to face Joe Warren in a Bellator championship rematch, has suffered an injury that has forced him to withdraw from a scheduled July 23 match with Warren.

Freire confirmed the news on Tuesday through Twitter, saying that he has fractures of his left thumb as well as ligament injuries that pushed him to the sidelines.

That injury news was originally reported by MMA Junkie, who spoke with Bellator CEO Bjorn Rebney on Tuesday.

Freire said that on Saturday, he was told it will take four months to be able to fight again, and is hoping to get his shot at the gold in November.

The 23-year-old Freire holds an impressive record of 17-1 since turning pro in 2004 at the age of 16. The Brazilian's only career loss came to Warren in June 2010 in a controversial split-decision victory that made Warren the promotion's first-ever featherweight champion.

Freire returned for season four's tournament and stormed through Georgi Karakhanyan and Wilson Reis with knockouts before defeating Daniel Straus via decision in the finals.

Instead of waiting around for Freire to return, Warren is off to other pursuits. Even prior to this, Warren asked to participate in Bellator's upcoming bantamweight tournament with hopes of becoming the promotion's first two-division champion. He was granted a spot in the tourney and is scheduled to face former Olympic freestyle wrestling bronze medalist Alexis Villa on September 24 in a first-round bout.