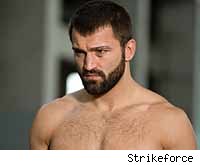 Former UFC heavyweight champ and ex-Strikeforce fighter Andrei Arlovski is among the first fighters to sign with the newly relaunched ProElite promotion, and will be one of the headliners of its upcoming August 27 card.

ProElite's director of operations T. Jay Thompson confirmed with Hawaii's KHON that Arlovski has inked a deal to participate.

Though once a UFC champion, Arlovski has struggled lately, losing four consecutive fights, including three by knockout. Arlovski was part of Strikeforce's Heavyweight World Grand Prix, but was knocked out by Russian Sergei Kharitonov in the first round of their February fight. Prior to that, he'd lost consecutive fights to Antonio Silva, Brett Rogers and Fedor Emelianenko.

Thompson didn't name any other fighters signed to the promotion, but among those rumored are former UFC fighter Kendall Grove.

A longtime UFC star, Grove was the winner of The Ultimate Fighter's season 3, and went on to a five-year run with the promotion, but after a three-fight win streak to start his UFC run, he could never find the consistency to make him a contender. He fought 13 times in the UFC, going 7-6. He was cut shortly after his last fight, a decision loss to Tim Boetsch at UFC 130.