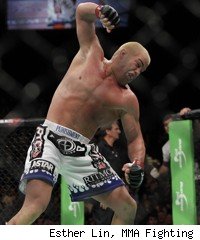 At least one career was salvaged at UFC 132, while another may have come to an end. Both contributed greatly to a memorable night in Las Vegas, where two little guys showed just how badly they wanted to go home with a hunk of leather and metal.

Now that it's all over and we've got the obligatory 4th of July hot dogs sizzling on the grill, let's take a minute to sort through this weekend's biggest winners, losers, and everything in between.

Biggest Winner: Tito Ortiz
If you'd asked me on Friday, I would have told you the "Huntington Beach Bad Boy" would be retired by now. No matter what he says, you know he must have considered that possibility as well in some of his darker moments. But not only did he come out on top in his must-win fight, he looked dominant in his submission win over Ryan Bader. The last person Ortiz submitted was Yuki Kondo. He did it back in 2000 and he did it with a neck crank, both of which tell you a little something about how long Ortiz has been in the game. Thanks to the win, Ortiz gets to stick around a little while longer. Whether it's the beginning of a genuine comeback or just a temporary stay of execution, only time will tell.

Biggest Loser: Wanderlei Silva
Another attempt to brawl results in another frightening knockout. Silva has taken too many of these sorts of beatings lately, and each one is harder to watch than the last. Some people will point to last year's win over Michael Bisping as proof that he doesn't need to retire, and sure, it does seem unfair to point to one knockout loss to Leben as proof that the man is done. At the same time, Silva's losses aren't like Ortiz's string of fairly close decisions. He's getting knocked all the way out, and his fighting style isn't evolving to protect his increasingly suspect chin. After 15 years in the sport, Silva can walk away with his head up whenever he feels like it. Let's just hope he feels like before something happens to him that can't be undone.

Best Removal of a Monkey from One's Own Back: Dominick Cruz
He said he was ready for questions about his submission loss to Faber to stop for good, and with this win he'll finally get his wish. You can argue the scoring, but I don't think you can argue the outcome. Cruz simply did more than Faber, even if he did get dropped a time or two. His speed and his well-rounded attack is going to be a problem for anybody in the division, and now that he's vanquished Faber he can move on to other challenges. At least until Faber wins a couple and starts asking for a rubber match. Then we can do this all over again.

Most Vicious: (tie) Carlos Condit and Melvin Guillard
Remember back when the one thing we all knew about Greg Jackson's fighters was that they played it too safe and never finished fights? No, not ringing any bells? Maybe it's because that bit of conventional wisdom just got kneed in its face until it was utterly unrecognizable. These two Jackson camp fighters dispatched their respective opponents with terrifying ferocity and efficiency on Saturday night. I'm not sure what you do with either right now, since both are probably worthy of title shots, and yet neither is next in line in his division at the moment. Neither Condit or Guillard seem like the type to wait around until things sort themselves out, which is bad news for every other contender. Chances are, the path to a title shot at both lightweight and welterweight will run through these two.

Most Impressive in Defeat: Urijah Faber
Personally, I scored it for Cruz (though I didn't give him every round, as one judge did), but Faber made it damn close. He came up with a better answer to Cruz's difficult style than anyone else the UFC bantamweight champ has ever fought, and even if he came up short in the end he still put on a fantastic show. It's the fourth consecutive title fight that Faber has lost, which puts him in a tough spot. As we saw on Saturday, he's still one of the best fighters in the world at 135 pounds, but what can you do with him at this point? The UFC can't just keep booking Cruz-Faber over and over, and yet Faber is still far above gatekeeper level. That's going to be a tough one for matchmaker Joe Silva to figure out, but you know he'll come up with something. He always does.

Least Impressive in Victory: Aaron Simpson
He spent fifteen minutes trying to force Brad Tavares to mate with a section of chain-link fencing, and while he got his hand raised at the end, he didn't make many new fans. If there's anything the UFC likes less than lay-and-pray, it's wall-and-stall. At least get the guy to the mat before you suffocate any hope for action out of the fight. Simpson didn't even do that. He clung to Tavares as if he knew that victory would be his as long as he could make sure nothing actually happened between the bells. The real bummer is, he was right.

Best Display of Angry, Shirtless Speed-Walking: Matt Wiman
I get it, he was upset. He thought he deserved the decision win over Dennis Siver, and when he didn't get it his disappointment/rage got the better of him. Maybe it was best for him to go find a quiet place to be alone with his anger right then. But at the same time, it's not like he was robbed by the judges. It was an incredibly close fight and it could have easily gone either way. When you're standing there waiting for the scores to be announced after a fight like that, you have to know there's at least a chance that you're not going to like what you hear. Not that I necessarily blame him for taking off like a man who just remembered that he left the stove on at home. Everyone hates losing. And wearing shirts.

Most Likely to Win More Bar Fights Than Championships: Chris Leben
He's never been the most technical of strikers, but more often than not he gets the job done. Against Silva he proved that his left hand is still as dangerous as ever, though that's true of most fighters when their opponents zombie-walk right into it. At this point in his career, Leben's appeal is pretty well solidified. He won't win 'em all, but he will do his best to make sure that somebody loses consciousness by the end of the night. There's definitely a place for that on UFC cards, even if that place is probably not in the main event most of the time. You're not going to become a UFC champion throwing haymakers and eschewing defense the way Leben does, but you can collect enough paychecks to keep you in gummi bears for years to come. And really, what else do you need in life?