UFC 132 Morning After: A Day When MMA Knocked Out Boxing 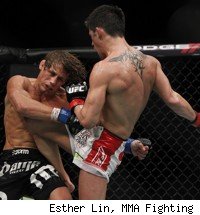 Around the world, the fight everyone is talking about right know is Wladimir Klitschko vs. David Haye, the heavyweight championship boxing match that took place in Hamburg, Germany, on Saturday. That fight drew 55,000 ticket buyers and tens of millions of viewers around the world.

Most of the people who watched that fight didn't see UFC 132. And we should all pity them.

If you ever wanted a clear illustration of what's right with mixed martial arts and what's wrong with boxing, you got it on Saturday: Boxing fans were told to expect the biggest heavyweight fight in almost a decade, and they were treated to a dull, plodding 12-round affair in which Klitschko did what he always does and Haye looked like he didn't want to fight at all. Meanwhile, MMA fans were treated to UFC 132, an absolutely outstanding event capped by a world bantamweight title fight in which Dominick Cruz and Urijah Faber gave fans everything they could ask for and more.

I'm a longtime boxing fan, and on Saturday morning I was just as excited about Klitschko-Haye as I was about Cruz-Faber. I thought both my boxing needs and my MMA needs would be fulfilled with big fights in both sports. But I was quickly reminded that boxing is too often a pretty dull sport: There are still some great fights and still some great fighters, but much of the time, you tune in for a big fight and you turn off your TV an hour later in disgust, mad that they sucked you in for a snoozefest.


More Coverage: UFC 132 Results | UFC 132 Post-Fight Press Conference
MMA has its snoozefests, too, of course, but they're nowhere near as frequent as the ones in boxing. Much more often, we get absolutely sensational displays like Cruz and Faber gave us in the main event of UFC 132. The difference in bang for the buck between Klitschko-Haye and Cruz-Faber isn't even close. One fight left everyone who watched it disappointed. The other fight left everyone who watched it thrilled.

And, of course, it's not just about the main event. UFC 132 was a great card from top to bottom, with 11 fights and not a bad one in the bunch. Boxing has become so focused on the main event above everything else that HBO, which owned the American broadcast rights, didn't even show any of the undercard fights. Boxing is all about the main event, while the UFC is about putting on a good show that lasts five hours or so.


Notes from UFC 132
-- Cruz retained his bantamweight title, but other than him the biggest winner from UFC 132 may have been Carlos Condit, whose victory over Dong Hyun Kim was an emphatic statement that he deserves a welterweight title shot. Based on timing, I think Condit will probably need another win before he gets that shot -- the next welterweight title fight, between Georges St. Pierre and Nick Diaz, won't take place until late October, and that would necessitate a long time for Condit to sit around waiting. But if Condit wins one more fight, I would absolutely rank him at the top of the list of fighters deserving of a title shot. He's definitely the best welterweight who hasn't gotten a crack at GSP yet.

-- Wanderlei Silva is probably done, UFC President Dana White said at the post-fight press conference. If he's done it's sad to see him go, but it's the right move. His knockout loss to Chris Leben was ugly.

-- It was amazing that Andre Winner was able to make it out of the first round of his fight with Anthony Njokuani. With a minute remaining in the round Njokuani unleashed a brutal assault of punches, kicks and knees, and Winner looked like he was out on his feet. Njokuani ended up winning an easy decision, 30-26, 30-26 and 30-27, and Njokuani deserves a lot of credit for his first UFC win. But give Winner credit, too, for hanging tough after taking a beating that would have made a lot of people quit.

--Aaron Simpson showed once again that if you're a good wrestler with good cardio, you can win a whole lot of decisions in MMA. Simpson doesn't do anything that looks really spectacular, but he has a style that makes it easy for him to grind out opponents and win over 15 minutes, as he did against Brad Tavares. The crowd booed at the end of the fight because they wanted to see more action, but what Simpson does is effective.

-- Brian Bowles said after the second round of his unanimous decision victory over Takeya Mizugaki that he had broken his hand. Rory Singer, Bowles' cornerman, replied, "A f**king champion fights in the third round. I don't give a s**t." Singer's lack of sympathy notwithstanding, it is a concern that Bowles' hands seem to be susceptible to injury. Bowles was out for a full year after breaking his hand against Dominick Cruz in 2010.

Quotes from UFC 132
-- "I felt great. I've been training hard, and I'm kind of feeling emotions right now because my whole life I've battled so much. And now I'm coming back to the top of my game, my life is in order, and it's a great feeling to be feeling like this." -- Melvin Guillard. It's great to hear that Guillard has his life on track, because there have never been any questions about his talent -- just about whether he could put his drug problems behind him and focus on his sport. It appears that Guillard is now doing just that.

-- "Congratulations to Dominick. He won. It wasn't enough of an output on my side to make it a decision, and I didn't finish him. I felt like it could have gone either way, I felt like I won the fight, but you can't really judge when it comes to that, so congratulations to Dominick." -- Urijah Faber. It's always nice that guys like Faber and Cruz, who fought for 25 minutes and who genuinely dislike each other outside the cage, are still classy after their fight.

Good call
--During Donny Walker's unanimous decision loss to Jeff Hougland, his corner repeatedly did something that every corner should do, but many corners don't: Tell the fighter the truth about how he's likely doing on the judges' scorecards. Too often, cornermen tell their fighters that they're winning even when they're not. Walker's corner was honest with him and told him after the second round and all through the third that he needed to finish the fight if he wanted to win it. It didn't work, as Walker wasn't able to finish Hougland, but he should thank his corner for leveling with him.

Bad call
-- I disagreed with all three judges in the Dennis Siver-Matt Wiman bout. They all scored it 29-28 for Siver, while I had it 29-28 for Wiman. Siver definitely won the first round and Wiman definitely won the second. The toughest round to call was the third, when in my opinion Wiman controlled the round with his grappling. The judges disagreed, and I think that was a bad call.

Stock up
-- Tito Ortiz won for the first time since he beat Ken Shamrock on October 10, 2006. How long ago was that? The UFC's champions at that time were Tim Sylvia, Chuck Liddell, Rich Franklin, Matt Hughes. There were no UFC lightweight, featherweight or bantamweight champions at the time. Five of the UFC's seven current champions had never fought in the UFC the last time Tito Ortiz won a fight. Ortiz isn't going to be the light heavyweight champion again, but considering that many MMA fans thought he had no business in the Octagon with Ryan Bader, Ortiz's stock is definitely up after his impressive victory.

Stock Down
-- George Sotiropoulos is now on a two-fight losing streak after his first-round knockout loss to Rafael dos Anjos. Sotiropoulos came into 2011 a contender in the lightweight division. He's nowhere close to title contention now.

Fight I want to see next
Cruz vs. Faber was so much fun that plenty of people will want to do it again, but the fight I really want to see next is Cruz vs. Demetrious Johnson. I think Johnson has just the right style to give Cruz trouble, and that would be the best bantamweight bout the UFC could book.