UFC 132 Bonuses: Cruz vs. Faber Is Fight of Night 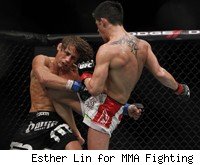 Dominick Cruz avenged his only career loss, going the distance with Urijah Faber and defending his bantamweight title at UFC 132 on Saturday night. The back-and-forth main event, which had scores all over the map from the judges, earned Cruz and Faber $75,000 bonus checks for Fight of the Night.

Tito Ortiz's first-round major upset submission of Ryan Bader on Saturday earned him Submission of the Night honors and an additional $75,000, and Carlos Condit also picked up an extra check for his Knockout of the Night win over Dong Hyun Kim to open the pay-per-view.

The main event bantamweight title fight between champion Cruz and former featherweight champ Faber lived up to its billing. That was a major feat considering the amount of animosity between the two fighters, who have had bad blood since their first fight, a WEC featherweight title fight in March 2007 that saw Faber defend his 145-pound title – and hand Cruz the only loss of his career heading into Saturday night.


Faber (25-5, 1-1 UFC), who dropped down from featherweight to bantamweight after losing a WEC title shot against Jose Aldo in April 2010, went the distance with the champ, knocking him down several times and finding some success counter-punching in close as the unorthodox Cruz (18-1, 1-0 UFC) backed out from tight exchanges.

After four back-and-forth rounds that could have been scored for either fighter, Cruz came out more aggressive in the fifth, trying a flying knee and shooting for a takedown. After landing a knee, Faber briefly had a guillotine that he couldn't fully sink in. A pair of Cruz takedowns, though, likely earned some points with the judges – though Faber was up quickly after each. But with 45 seconds left, Cruz landed another pair of perhaps point-searching scramble takedowns that sealed the deal on at least one scorecard.

Cruz won a unanimous decision with scores all over the map: 50-45, 49-46 and 48-47. "The dude hits hard. His hands are very fast. They were prepared," Cruz said after the fight. Faber now has lost four straight title fights – twice to Mike Brown, once to Aldo, and now to Cruz, who avenged his only career loss.

Ortiz (16-8-1, 15-8-1 UFC) had his back against the wall going into the fight with Bader. As reported by MMA Fighting in January, White said another loss from Ortiz, the most successful light heavyweight champion in UFC history, would be his last fight in the promotion. With no wins in nearly five years, since a TKO of Ken Shamrock in October 2006, Ortiz has also battled injuries and surgeries outside the cage, as well as a well-publicized feud with White.

Though he was an underdog of as much as 5-to-1 at some online sportsbooks, Ortiz stunned most of the MMA world when he caught Bader (12-2, 5-2 UFC) with a tight right hand that dropped the Season 8 winner of "The Ultimate Fighter." Ortiz pounced, landed a few ground-and-pound shots, then locked in an arm-in guillotine that forced Bader to tap for the second straight fight, this time just 1:56 into the first round. Bader lost for the first time in February to Jon Jones, who went on to get a title shot and took the belt from Mauricio "Shogun" Rua in March.

Condit (27-5, 4-1 UFC), the former WEC welterweight champion, won his fourth straight fight and third straight bonus award. His first-round KO of Dan Hardy at UFC 120 was a Knockout of the Night, and his comeback win over Michael MacDonald at UFC 115 was a Fight of the Night winner. Condit and Dong Hyun Kim (14-1-1, 1 NC, 5-1, 1 NC UFC) fought relatively safe and tight for the first couple minutes of Round 1, but Condit then threw a flying knee that landed right on Kim's chin, knocking him to the mat. Condit quickly swarmed and almost as quickly finished the fight with punches on the ground.

After the fight, Condit said he nearly had to pull out of the fight with an illness two weeks ago, but he believes he's ready for a welterweight title shot. Current champion Georges St-Pierre defends his title against former Strikeforce welterweight champ Nick Diaz at UFC 137. "What do you think, Joe Silva? Am I ready for a title shot or what? I certainly hope so," Condit said.

The Knockout of the Night bonus looked to be Rafael dos Anjos' without much likely competition when it happened to open the Spike TV prelims. He stopped George Sotiropoulos in an upset with a big right haymaker less than a minute into the fight. But then Melvin Guillard got a huge knockout of Shane Roller to keep rolling in the lightweight division. Condit's win made it three straight KO stoppages when he opened the pay-per-view with his big TKO. And Chris Leben, in the co-main event, knocked out Pride legend Wanderlei Silva just 27 seconds into the fight – the quickest loss of Silva's lengthy career.