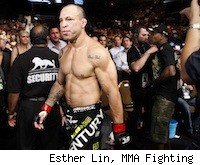 LAS VEGAS -- One of MMA's most storied careers began in Brazil nearly 15 years ago, but it may have ended in one furious burst at the MGM Grand on Saturday night.

For a decade and a half, Wanderlei Silva (33-11-1 1 NC) thrilled fight fans with his hyper-aggressive, slugging style, but against Chris Leben at UFC 132 he ended up on the receiving end of the same type of brutal finish that he became famous for dishing out in Japan's Pride organization not so long ago.

"People knew that he and Leben were going to come out and they were going to throw until somebody fell down, and it was Wanderlei tonight," UFC president Dana White said at the post-fight press conference. "People love him so much because of the way he fights and his style and the kind of person he is, but [it's] probably the end of the road for Wanderlei."

Things started off normally enough for Silva. As expected, he and Leben met in the center of the cage and traded power punches right off the bat.

Silva unloaded on the season one 'Ultimate Fighter' competitor with his characteristic wide, looping hooks, but after Leben knocked him off-balance with a straight left, he then dropped Silva to the mat with an uppercut in close and then finished him off at the 0:27 mark with several more punishing left hands on the ground.

With the loss, the 35-year-old Silva fell to 2-4 in his current UFC run. The knockout was the fourth in eight fights for Silva, who suffered only one TKO loss in the first ten years of his prolific career.

And though he said earlier this week that he hopes to fight for five more years and get ten more fights under his belt before he retires, White said the end may come much sooner for Silva, much like it did for former UFC light heavyweight champion Chuck Liddell, who was essentially forced into retirement by White after a streak of frightening knockout losses.


"I think it's one of those ones where I'm going to have to sit down and talk to him, kind of Chuck Liddell him into it," White said. "The guy has nothing left to prove. He's a warrior. People love him all over the world. I just don't want to see...that happen to him anymore."

Few fans do, but as recently as last February Silva looked sharp in a decision win over Michael Bisping. He gave no indication before the bout with Leben that he planned to retire if things didn't go his way, so he may not react too kindly to White's suggestion that he hang up the gloves.

Of course, White has made similar statements about other aging legends in the past, and they don't always go so gentle into that good night just because the UFC boss thinks they should.

Liddell practically begged for -- and received -- one more chance after his knockout loss to "Shogun" Rua. White also had a change of heart regarding Mirko "Cro Cop" Filipovic, who he initially suggested would be done following a knockout loss to Brendan Schaub. Lately, however, White seems to have softened on that stance, and Filipovic will likely get at least one more fight in the UFC.

It's hard to tell exactly how seriously to take White's latest proclamation, and Silva wasn't at the post-fight press conference to speak for himself. But after a decorated career that's left him with a passionate fan base and a highlight reel to match any other, it's hard to see what Silva has left to prove as a fighter.

He said earlier this week that he's no longer in it for the money, and his legacy in the sport is beyond question -- even in the mind of the man who may have sent him tumbling into retirement on Saturday night.

"Wanderlei Silva's my favorite fighter. He always has been," said Leben, who added that he's "never been so scared" before a fight as he was going into this one. "The man is a legend. What he's done for the sport is absolutely amazing."

And yet, even legends can't go on forever. Whether we've seen the final chapter in Silva's story, only time will tell.