For Tito Ortiz, Long-Awaited Win Is Worth Its Weight In Gold 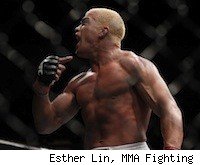 No writer can properly quantify the emotion of a win. How happy are you? We often ask that of pro athletes after a big success, hoping they do it for us. Sometimes they're "thrilled" or "elated" or "excited" but in reality, words don't do feelings justice when they've put in week after week, month after month in hopes of reaching a moment when they get to celebrate.

Losing is even worse. Fighters are known to fall into bouts of depression after suffering a defeat, locking themselves in darkened spaces, only to relive their bad memories again and again. Imagine then, how Tito Ortiz had suffered before last night. A proud former champion, he had gone winless in five fights over four-and-a-half years, been asked to retire by UFC brass, been forced to beg for another chance.

Imagine then what Tito Ortiz was feeling last night. He didn't just win a fight; he won back his career. To steal a phrase from the president (Obama, not White), he won the future. He walked into the octagon for what was supposed to be the last time at UFC 132, counted out by the oddsmakers, considered washed-up by the fans, and yes, discounted by the media. Lose, and it was over. And let's face it, after going winless for nearly five years, his career obituary had been pre-written.

And then on the way to his forced retirement, a surprise. Ortiz stunned Ryan Bader, a borderline top 10 fighter who was considered by many a younger, better version of him.

By the time the fight began, money was pouring in on Bader, who had gone off as a huge favorite, as high as -800 on some sports books. The closest line you could find was about -500.

You couldn't blame the doubters. It had been 1,726 days between wins for Ortiz. One-thousand-seven-hundred and twenty-six days! When he last won, it was October 10, 2006. Since then, the Los Angeles Lakers won two NBA championships. Randy Couture unretired, won the heavyweight championship, resigned, returned, fought six more times, and retired again. Barry Bonds broke the all-time baseball home run record.

In sports, four-and-a-half years can be an eternity. It is for football players; an average NFL career is just 3.5 years. Even in regular life, it's a long time. During Ortiz's stretch, kids went into college and graduated as adults with degrees.

Think about failing for that long, and what that does to the psyche of someone not used to it. It's easy to fold up shop and fade away quietly, especially when you have money to fall back on, and by all accounts, Ortiz does. When you're surrounded by nice things, by a comfortable life, it's hard to make yourself uncomfortable by putting in the extra time that helped you get there. Forrest Griffin once told me, "The extraordinary becomes ordinary pretty quickly." I suspect he's not any different than most famous people with money in that belief. Life makes you adapt to what's around you. That's especially true when things are good, but it's also true in times of turmoil.


That's why it would have been easy for Ortiz to keep losing. It wasn't like he was getting blown out. Aside from a TKO loss to Chuck Liddell, he fought Rashad Evans to a draw, went to decisions with Griffin, Lyoto Machida and Matt Hamill. But the injuries seemed to rob him of his explosion and firepower. And we had to wonder what exactly Ortiz could be if he couldn't be a bully?

Ortiz caught Bader with an uppercut that floored him, then followed him to the mat, where he has always had underrated submission skills. He wasted no time in snatching Bader's neck when he left it open. As he squeezed, you could see the determination on his face; he held on to that neck like it was his career. And it was. When he got Bader to tap, he ensured his return. There will be at least one more payday, one more time in the spotlight.

Who knows what to make of this win aside from that? Ortiz deserves all the credit in the world for it, but at 36 years old and in a division full of killers, it's hard to envision him putting together any extended stretch of victories. But in some ways that does not matter. Even in the midst of fading away, every legend deserves one last moment of glory.

Once upon a time, Ortiz was the most predictable fighter in the UFC. Takedown, ground and pound, stoppage, celebration. Losing took that away from him, and time seemed to steal everything else. But it couldn't take this moment. We watch sports for the unexpected. And long after we figured we could write the ending on his page of history, Ortiz gave us a surprise worth its weight in gold.

For a long time, Ortiz has attracted an audience due to what he said as much as for how he performed. On Saturday night, the win was its own statement. Afterward, he did his gravedigger routine. It was the kind of post-fight show that used to be the norm a few years ago. After so long between wins, it might have been overkill, but after so long between wins, who could blame him? He ran towards the octagon and jumped atop it, straddling the fence as he let out a primal scream of exhilaration. Not a word was necessary.