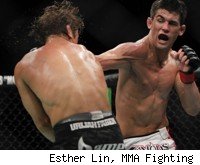 LAS VEGAS -- On paper, the rationale behind the UFC 132 lineup seemed simple enough: get them to come for stars like Tito Ortiz and Wanderlei Silva, and they'll stay for Dominick Cruz and Urijah Faber.

No matter what you think of that hypothesis in theory, after the show that Cruz and Faber put on in Saturday night's main event title bout, you have to admit that it worked perfectly in execution.

Perhaps Cruz, who retained his UFC bantamweight title with a unanimous decision win over Faber after five close rounds, put it best: "We all train hard. We all work hard. Just because we're little guys doesn't mean we can't scrap."

The difference is that, after UFC 132, everyone knows it. And it's about time.

Years from now we'll probably look back on the slow, arduous rise of MMA's little guys from the cable TV hinterlands of the WEC on Versus to the main event of UFC pay-per-views and wonder why it took so long for some of the sport's most consistently exciting fighters to get the recognition they deserve.

Think about how long they fought for a fraction of what bigger fighters were getting. Better yet, think about how seldom they gassed out, or showed up to a fight unprepared, or just failed to put on a memorable performance.

But, the conventional wisdom told us, people don't want to see midgets in board shorts. They want the big guys. They want heavyweights swinging haymakers at one another's chins until someone falls down or just huffs and puffs to a full stop on his own volition. Who cares about 135-pound dynamos who are as exciting in the 25th minute as they are in the first?

Judging by the sound of Saturday night's crowd during the final seconds of Cruz-Faber, however, the conventional wisdom once again turns out to be woefully wrong.

As UFC president Dana White put it, "No matter how big the star power is on the undercard, these guys are fighting for the title. They deserve the respect to be number one, and tonight they went out and earned it. They've done it a million times before, but tonight everybody really saw it. Tonight, here in Las Vegas, tons of stars, a big 4th of July fight, and they went out and showed the world what we already knew."

Of course, here's where the cynic might wonder why, if White knew it would turn out like this all along, he kept the little fellas underpaid and under-appreciated in the WEC for so long, but that's water under the cheaply constructed bridge now. The point is, they're here now, and we should all be grateful for it.

For 25 minutes on Saturday night, Cruz and Faber gave us everything we've come to expect from the lighter weight classes. The only thing more impressive than the technique on display was the pace. Those two fought like a couple of chihuahuas battling over the last piece of bacon, and by the end even the spectators were breathing hard.

At the post-fight press conference, Cruz summed it up best: "It feels like I was in a tornado and I was running into stuff -- dressers and what not, I don't know."

But besides just the physical, these two also delivered the pre-fight hype. They spent weeks taking verbal potshots at each other, and fight week was one quotable quip after another between the two familiar rivals.

Even when it was all over and Faber gave Cruz his due as a worthy champion, he couldn't quite bring himself to doff his cap completely. When asked if the rivalry was now over and he was ready to acknowledge Cruz as the alpha dog in the neighborhood, Faber paused.

"I have to watch the fight again," he said.

After the performance those two delivered, he may not be the only one.