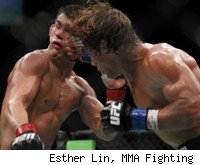 LAS VEGAS -- This is the UFC 132 live blog for Dominick Cruz vs. Urijah Faber, the main event of tonight's UFC pay-per-view at the MGM Grand Garden Arena in Las Vegas.

Cruz (17-1) is making his UFC debut in a bantamweight title defense against the one person who has defeated him. Faber (25-4), who made quick work of Cruz back at WEC 26 in March 2007 with a guillotine choke, is challenging for the title after winning his UFC debut against Eddie Wineland at UFC 128.

Round 1: As expected, Cruz's footwork is giving Faber a little trouble getting his timing at first. Faber settles down and gets in close to try and put Cruz down, but Cruz stays up and gives Faber a kick to the body once he's free. Cruz tries a knee to the body and Faber counters with a right hand that drops him. The crowd explodes, but Cruz scrambles up quickly. Nice body kick by Cruz, and Faber catches it but can't do anything with it. Cruz lands a sharp uppercut. Cruz fires off a low leg kick and then a right hand. Every time Faber gets set to throw, Cruz is gone. Faber charges in to clinch Cruz against the fence, but Cruz stops him with the underhook. They separate and go back to work. Good knee to the head by Faber, but Cruz responds with a jumping knee of his own. Faber nearly gets the takedown, but the horn stops them. MMA Fighting scores it 10-9 for Cruz.

Round 2: Faber gets in close to start the round and tries to tie Cruz out, but Cruz keeps slipping out of his grasp. Cruz is the aggressor now, chasing Faber around the cage. Good left hook from Cruz, followed by a stinging two-punch combo. Faber lands a good right that knocks Cruz off-balance, but Cruz seems none the worse for wear. A 'Let's go Faber!' chant erupts inside the MGM Grand. Cruz feints him back with low kick set-ups, but can't get anything off. Faber reaches for a single-leg, then gives it up and eats a left hook. Kicks coming in bunches now from Cruz, to the legs and the head. Cruz floats inside and pops Faber's head back with a jab. Faber bulls inside and drops Cruz with a short hook. Cruz recovers quickly and is back on his feet, then puts Faber down with a double-leg moments later, but can't keep him on his back for long. Cruz feints with low kicks then jacks Faber with a punch combo just before the horn. MMA Fighting scores the round 10-9 for Cruz.

Round 3: Cruz dances in with a jab and Faber hooks him back. Faber wings a big right hand and Cruz nearly gets him down with a whizzer. Cruz jabs and then is gone by the time Faber fires off a counter. An uppercut from Cruz pops Faber's head back. Faber moves in for a body lock but gets shrugged off. Faber ducks under a Cruz right and throws him down from behind. Cruz rolls and takes top position, but Faber scrambles up and Cruz has to let him so as not to get rolled over. They both fire off strikes as soon as they hit the feet, and the crowd roars in appreciation of this incredible pace. Left hook lands for Faber, and Cruz answers with a jab. Cruz digs for the takedown in the final seconds of the round, but can't get it. MMA Fighting scores it 10-9 for Faber.

Round 4: Cruz gets off a good right hook and a kick to the body to back Faber up. Faber catches him with his feet too close together and smashes a right hand to his cheek. Cruz stumbles and then takes a seat. Faber charges in and Cruz tries for a takedown as he's scrambling to his feet, but Faber shrugs him off. Cruz misses with an uppercut and then lands a right. His punches seem to have slowed just a bit. Faber comes in with a right and Cruz ducks under looking for a takedown. He trips Faber to the mat, but Faber pops up as if he's spring-loaded. The pace slows a bit approaching the final minute. Cruz feints and then lands a nice surprise right. Cruz shoots low but Faber steps out of it. They end clinching against the fence. MMA Fighting scores it 10-9 for Faber. But man, these rounds are all very, very close.

Round 5: Faber's cornerman sends him out for the final round with passionate pleas to go be a champion. They go right to work again, and Cruz tries for a takedown that leads to him briefly taking Faber's back before they end up back in the clinch. Faber tries a knee and Cruz tosses him off, but nearly gets himself caught in a guillotine looking for Faber's legs. Faber comes in with a hook and Cruz ducks under for a takedown. He gets it, but as soon as Faber's back hits the mat he's on the move and scrambling up. Cruz is just a move or two behind, and can't hold on to the slippery Faber. Cruz wings a body punch and Faber sticks him with a right hook. Cruz takes a deep breath and Faber tries a kick to the head that misses. Cruz trips him to the mat, but Faber is up in a flash. Another trip takedown for Cruz, and again Faber is up. There's less than 20 seconds left, and this one is going to come down to the wire. Cruz tries one last shot, but gets stonewalled against the fence. The horn sounds, and Faber immediately sticks his hand in the air to declare himself the winner. Cruz gets to his feet and does the same. Somebody's going home disappointed. MMA Fighting scores the round 10-9 for Cruz.

Jeff Hougland smiles during his introduction against Donny Walker at UFC 132 on Saturday, July 2, 2011 at the MGM Grand Garden Arena in Las Vegas.

Donny Walker attempts to fire up the crowd at UFC 132 on Saturday, July 2, 2011 at the MGM Grand Garden Arena in Las Vegas.