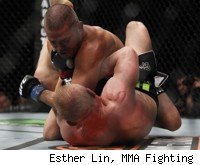 LAS VEGAS -- This is the UFC 132 live blog for Dennis Siver vs. Matt Wiman, a lightweight bout on tonight's UFC pay-per-view at the MGM Grand Garden Arena in Las Vegas.

Round 1: Both guys start off throwing heavy leather right away. Wiman shoots for a takedown, but Siver defends well. They take turns with leg kicks, then Wiman tries a Superman punch that misses. The crowd applauds their high work rate, and Wiman responds by punching his way in and spinning Siver down for a takedown, though the German is back up quickly. Wiman keeps after that takedown, but Siver won't give it up. Eventually they work back to the center and Siver goes back to work with kicks. Siver whiffs on a big right hand, but transitions into a successful takedown attempt. Wiman threatens with a kimura, and it's enough to make Siver stand and let him up. Big combo by Siver just misses. Wiman tries a single-leg, then abandons it. Siver lands some good hooks in the final minute, then tries to roll Wiman into an arm lock and ends up on bottom just before the horn. MMA Fighting scores it 10-9 for Siver.

Round 2: Wiman tries for a single-leg off a Siver knee, but again Siver proves tough to put down. Wiman stays after it, drawing the ire of a crowd that has grown accustomed to quick, brutal finishes. Siver tosses Wiman off for a moment, but it's not so easy to get rid of him. Wiman finally manages to flip him over but almost gets triangled in the ensuing scramble. Wiman working from Siver's guard now, and somebody is cut, though I can't tell who from my vantage point. Wiman opens up with elbows from the top, and now it seems like Siver is definitely gushing blood. Wiman gets a warning for trying to find that cut with his own forehead. Wiman hammering Siver from the top now. This is a bloodbath, and getting a good grip is going to be tough for either man. The horn sounds, and Siver is drenched in his own blood due to the cut on his forehead. MMA Fighting scores it 10-9 for Wiman.

Round 3: Wiman wastes little time trying to put Siver down again. He shoots for a single-leg off a Siver knee to the body, then again a moment later. Siver defends well and forces Wiman to give up and start over. Siver tosses off a kick to the head that Wiman blocks before giving him a 'C'mon, son' kind of look. Spinning back kick from Siver just off the mark. Superman punch from Wiman, who then thinks briefly about a single-leg before giving up on it. Wiman dives for another single-leg moments later, but Siver is stonewalling him and peppering him with short punches. They tie up against the fence and Wiman jumps into an arm-in guillotine. Siver gets out and Wiman tries to transition to an oma plata before getting back to his feet. Wiman catches Siver's leg and then kicks his free leg out from under him. Siver rolls to top position, then backs up and puts Wiman down with a low kick of his own. The horn sounds to end it, and this is a very tough fight to call. All the blood that Siver poured onto the mat might make the difference in the end. MMA Fighting scores it 10-9 for Siver.

Wiman immediately turns and bolts out of the cage, heading for the exit. He's going the wrong way if he wants to get back to his dressing room, but no one can catch up to him fast enough to tell him.