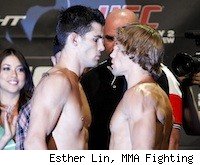 LAS VEGAS -- Don't be alarmed by that sound you hear when UFC bantamweight champion Dominick Cruz and challenger Urijah Faber end up in the same room together. That's just two alpha dogs chipping away at each other with every muted comment and every sidelong glance.

Like when Faber says he hasn't spent much time thinking about Cruz since he submitted him back in 2007, "but he was thinking about me a lot -- almost kind of weird."

Or when Faber launches into a lengthy explanation of his viral video effort with musician D.J. Paul in the lead-up to his fight, and Cruz follows it by leaning into the microphone to say simply, "No, I haven't seen the whack videos."

For Faber, needling Cruz seems more like a pastime than anything else. He does it just for fun, because he can, and sure, also because something in him can't allow this kid to walk around the UFC belt around his waist and a smirking scowl on his face without tossing off a remark here and there to bring him back down to earth.

But for Cruz, this isn't a game. As long as Faber is there with that beach bum smile as a living reminder of his one and only loss, it's not so easy to relax and enjoy life as the champ.

While Faber said he thinks Cruz's animosity toward him is rooted in jealousy, Cruz, not surprisingly, had his own interpretation.

"That's just his big head talking again," he said of Faber. "It's far from that. It's more along the lines of, I've been a champion for a while now, and right after I win the title it's questions about losing to Urijah Faber and not questions about how well I did winning my title. I'm ready for those questions to stop and I'm ready to prove that I'm the champion that I am on Saturday night."

Maybe the worst part about dealing with Faber's verbal slights is that they're rarely as direct or even as insulting as the ones you hear in most rivalry fights. He might question whether Cruz is more annoying than dominating, but other than that, his quips are the kind that slip in under a person's defenses and fester there for years.

That's why Cruz said he's still irked by Faber's remark to him after their first fight four years ago, which he felt was a bit of an unnecessary turn of the knife after it was all over.

Not mean or derisive, exactly. But not nice, either. That's Faber's style when it comes to his rivals. Cruz takes the more direct path, or else simmers in silence as he glares a hole in "The California Kid" from across the room.

Even though he's the champ, it's not hard to see that Cruz needs this fight more than Faber. He's the one still trying to carve his name into MMA history. Faber's already been there and done that. He could retire tomorrow and be remembered as a pioneer of the lighter weight classes.

But then, he's not one to miss out on such a golden chance to tweak a rival's ego, or smash his face.

"The cool thing about this fight, the reason it's a grudge match and all that, is you put Dominick and I in the same little neighborhood and we probably would have ended up fighting each other," Faber explained. "His bad attitude and me not taking crap, and me being the badder man, that's what this is about. Like-minded people, we're going to butt heads when it comes to the fight game and see who's boss."

And on and on it goes -- chip, chip, chipping away -- until they finally wind up in the same cage together again. Then it will be time to put away the chisels and go to work with the hammers.