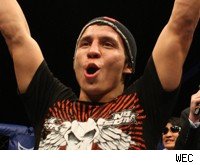 Not only is Joseph Benavidez one of the wittiest fighters in the game, he also knows as much or more than anyone about the two main event participants at UFC 132.

Plus, he's a Joe-Jitsu black belt tie-dye belt and a skilled (or so I hear) bowler, so why wouldn't I want to sit down with him for this edition of Fighter vs. Writer?

Benavidez fought two memorable fights with Cruz, and has spent the last few years as one of Urijah Faber's main training partners, so he has a perspective on this fight that few can match. It's probably not hard to tell who he's picking in Saturday night's main event, but does he have what it takes to go pick-for-pick on the rest of the main card with yours truly? Find out below.

Benavidez: Faber via submission. "He's been my main training partner for four years, and I've just seen the way he works and the goals he sets for himself. For all these four years, I've never seen him more inspired and motivated for a fight. He's a big part of the WEC going to the UFC, so this is huge for him. He's a guy who rises to the occasion, and this is the biggest of occasions for him. Not only that, but he obviously has the skills. Dominick will be hard to hit, but he doesn't do much damage, and Urijah has the grappling edge."

Fowlkes: Cruz via decision. He's just too fast and too hard to pin down. He may not have the power to knock Faber out, but I doubt Faber will be able to put his hands on Cruz very much at all, so I'm not sure how much it matters. Faber was a true champ in his time, but that time is over.

Benavidez: Silva via TKO. "Before the Stann fight I didn't think Leben could get knocked out, but he did, so I guess it could happen again if they're going to sit there and slug. Wanderlei could definitely catch him with a punch. I think they are going to stand there and swing at each other, and Leben will go down. Plus, Wanderlei's a legend, so I kind of root for him, even though I love watching Leben fight also."

Fowlkes: Leben via TKO. Obviously Silva is a sentimental favorite, but I don't think his chin is nearly as solid as it once was, and being out of action for 16 months won't exactly make him sharper in the cage. Even if they throw down in the center of the cage, Leben can take it and dish it out better at this point.

Benavidez: Ortiz via decision. "I think Tito is going to prove a lot of people wrong and come out with a comeback here -- maybe not a total comeback -- but I think he'll go out there and get the win, old school ground-and-pound style. I actually think Tito's boxing is a lot better too."

Fowlkes: Bader via decision. I admire Benavidez's optimism, but I'm not such a believer in Ortiz's boxing, nor do I think he's right about Bader having weak takedown defense. Bader is younger, quicker, and more explosive. I don't see where Ortiz holds an advantage.

Benavidez: Condit via TKO. "He's always in a super exciting fight and puts just this horrendous pace on people. He really lives up to his name: 'The Natural Born Killer.' He goes in there and tries to kill you. He's going to put a lot of pressure on Kim and get the victory by stoppage."

Fowlkes: Condit by TKO. Kim absolutely has the power to turn this into a grappling match, and if he does, he can absolutely win it there. But I don't see Condit going out like that. He'll come back late in the fight and overwhelm Kim with sheer aggression.

Benavidez: Wiman via decision. "That's a tough one. Wiman has really good wrestling and has been putting it on people lately, but so has Siver. With Wiman though, I think he's really hitting his stride right now, and this is going to be one that really catapults him to that next level where he wants to be at in the division."

Fowlkes: Siver via decision. I simply cannot pick against the underrated Siver, who consistently surprises people and then melts back into the background to be forgotten and then underrated once again. His takedown defense will keep this one standing, and his power will keep Wiman reeling.