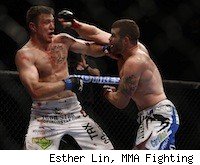 Nate Marquardt will have to wait until after Independence Day to have his Pennsylvania state athletic commission suspension lifted. A spokesman from his Alchemist Management team told MMA Fighting that Marquardt's camp has been informed by the commission that "all of our paperwork and lab results are in order," and the team is hoping he will be removed from the suspension list around July 5 or 6.

Meanwhile, as other developments of Marquardt's hormone replacement therapy have come to light, additional related issues have been raised. Among them: if New Jersey denied Marquardt a testosterone usage exemption (TUE) and placed him on its suspension rolls following his March UFC 128 win over Dan Miller, couldn't the result of that fight be changed to a no contest?

According to New Jersey athletic control board legal counsel Nick Lembo, the answer is no.

As Lembo explained it, a TUE is a two-pronged process. First, the commission and its doctors must determine whether the treatment is a medical necessity, and second, the fighter must still test within normal testosterone ranges to qualify for competition.

Here's the tricky part. Determining medical necessity is a lengthy ordeal that can take months. By way of context, Marquardt first approached New Jersey officials about a TUE on Feb. 11, and he was still working with them on the process when his TUE was denied on June 23, a full four-and-a-half month stretch.

During that time, state commission doctors examined medical records, paperwork, check blood test results, and interacted with the athlete's doctors. Because that type of due diligence takes so much time, fighters are allowed to compete while undergoing the process as long as they can test in an acceptable range in the meantime.

New Jersey regulators gave Marquardt approval to fight, provided that he go through this entire lengthy process and that his testosterone levels remained within range. According to Lembo, just in relation to the March bout, he was subject to testosterone-level checks twice before the bout, on fight night, and twice afterward.

The problem then, came afterward, as the state continued to monitor him through June. Marquardt had been asked to stop undergoing therapy for eight weeks to check his baseline levels, which he did. He took three tests in May, and two in June. Everything seemed fine until he returned to his personal doctor, a primary care physician. The NJACB had strongly suggested Marquardt continue his care under a board-certified endocrinologist.

On June 16, a week before his scheduled Pennsylvania fight with Rick Story, Marquardt took another test in his continued New Jersey monitoring. The results of this one, however, were high, forcing a TUE denial and full disclosure to the Pennsylvania commission. For the longtime UFC mainstay, it was the beginning of the end of his octagon career. But since it had no impact on his March fight with Miller, the result of that fight -- a Marquardt unanimous decision -- will stand.

"What we want to do is ensure there's no unfair advantage," Lembo said. "On the night of the fight, there was not. Nate came to us and cooperated. He was subjected to several tests. Once the TUE process started, he was compliant all the way along until weeks later, returning to his original treating physician. His next test had problems. If you're continually tested and your level is high, you're going to get caught."