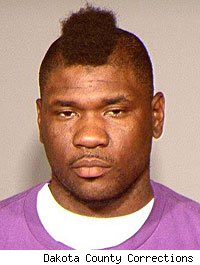 Recent Strikeforce Heavyweight GP entrant Brett Rogers was arrested and jailed Wednesday for allegedly assaulting his wife and has since been released from Strikeforce.

According to FOX 9 News in Minnesota, Rogers and his wife had a domestic argument that escalated into Rogers allegedly punching his wife in her head repeatedly as well as choking her unconscious. Rogers is claiming his wife punched him and he retaliated.

Away from the hand of justice, consequences were swift for Rogers. On Thursday afternoon, UFC president Dana White, a co-owner of Strikeforce parent company Zuffa LLC, confirmed that he has been "cut immediately" from his contract.

Rogers has been charged with three felonies - assault in the third degree, domestic assault by strangulation and pattern of stalking conduct. Rogers was also charged with the misdemeanor endangerment of a child since his daughter was around and tried to intervene during the altercation.

Bail was set at $100,000 and Rogers made a court appearance Thursday with a second one slated for Friday.

Rogers, 30, is best known for his 22-second knockout upset over Andrei Arlovski that earned him a shot at Fedor Emelianenko months later at a Strikeforce event in November 2009. The victory over Arlovski improved Rogers' record to 10-0, but would turn out to be his last significant win. After the loss to Fedor, Rogers fell to Alistair Overeem via TKO, picked up an unimpressive decision win in a tune-up over Reuben Villareal and most recently, lost to Josh Barnett via submission in the opening round of the Strikeforce Heavyweight GP.