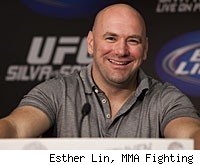 LAS VEGAS -- UFC president Dana White responded to rumors that the organization might be headed to Japan soon by telling reporters on Thursday afternoon that "the rumors are true."

"We're going to come to Japan, and probably very soon," said White, who added that he expected it to happen "this year."

It's the most optimistic the UFC frontman has sounded about a Japanese event in a very long time. Previously, whenever the subject came up, White blamed organized crime elements in Japan for keeping the UFC out.

But after Thursday's UFC 132 pre-fight press conference in Japan, White sounded a confident tone about getting a Japanese event done in 2011, and said the organization is also very close to branching out with a new installment of The Ultimate Fighter, possibly in Brazil.

"We're already working on it. If that's not the first place, it'll probably be the second. We've got three or four places dialed in right now for it," White said, adding that the Philippines was expected to be the next reality show expansion, "but I've been saying that for six months, so we'll see what happens."

When asked what the hold-up was, White pointed to the organization's rapid growth and non-stop events schedule, saying that there just aren't enough hours in the day to get everything done at once. Even when he was taking a mini-vacation in Maine earlier this week with his family, he said, the phone "never gets turned off."

"We're so big and reaching out so far, it's just keeping all this s--t together is crazy. We're working on so many different things and trying to get all these deals done. If you look at it right now, our television deal is up, we just went through all our pay-per-view deals, we're expanding into all these different countries, plus we still run the regular business that we always ran. ...It's crazy."