Chris Leben's Biggest Problem in Last Loss? Too Much Candy 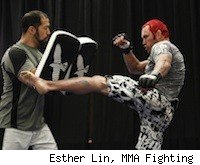 LAS VEGAS -- As Chris Leben pointed out this week, his fight with Wanderlei Silva at UFC 132 will be his 18th UFC bout. But that doesn't mean he's not still a work in progress, learning as he goes.

Take, for instance, his loss to Brian Stann at UFC 125. Stann knocked him out in the first round, but Leben didn't exactly help his own cause before the fight, he told reporters on Wednesday.

"I ate a bunch of candy, dude. I'm not lying," said Leben, who, of course, also stressed that he didn't want to take anything away from Stann's victory.

"I didn't eat sugar for like two months. Then after I made weight I went and bought gummy bears and chocolate and ice cream, and I ate that. My body hadn't had sugar, so I was backstage puking, sh---ing and puking when I was on-deck for that fight. That's not a lie; that's the truth. And Brian Stann fought an amazing fight, but hindsight's 20/20. No gummy bears for me this fight."

Leben, a nine-year veteran of MMA with over 30 pro fights, was undone by the highly questionable decision to feast on sweets right before fighting another human being in a cage for money.

More Coverage: UFC 132 Fight Card | Watch UFC 132 Live Online | UFC 132 Results
But hey, at least now he knows not to do it again. Not that that's a lesson many fighters have to learn the hard way, but still.

At 30 years old, there aren't many secrets about Leben's game. He comes forward, throws one looping bomb after another, and tries to bait every opponent into a street fight. Against Silva, the baiting process ought to be the easiest part, or at least that's what most people are expecting.

For Leben, the fight with Silva is a chance to take on a personal hero, as well as a bit of an MMA role model.

"When I first starting fighting, I was watching Wanderlei and, in some ways, attempting to emulate some of the stuff that he did," Leben said. "The guy's been in dozens of legendary wars. You can't go into 7-11 without seeing him next to the little Xyience things. He's everywhere."

At the same time, even with a win over the aging Silva, Leben isn't likely to be a title contender any time soon -- though UFC president Dana White did say that the winner would likely be "in the mix," for what that's worth.

But Leben seems to realize his own limitations, and has instead set his sights on being one of the most exciting fighters rather than winning at all costs. The belt, he said, is just a "superficial object." Etching your name in people's minds as a fan favorite isn't something you can touch, but it does seem like a more attainable goal for Leben.

"There's somebody that's not in the UFC that's better than me that can beat me right now," Leben said. "I guarantee that. There's a lot of people in this world. Where I'm at in my career, I just want to have epic fights. I want to have fights that go down in the history books. I want to put on a show. I want people to think, hey, Chris Leben's on this card, I'm buying that pay-per-view."

If that's his goal, he seems to be most of the way there already. Leben has rarely been in a boring UFC fight, and the few he has had were almost universally his opponent's doing rather than his. If things with Silva even live up to half of the hype, he should have another slugfest to add to his highlight clip very soon.

And later, when it's over? Now that's the type to break out the candy and celebrate. At least now he knows.