After 15 Years, Wanderlei Silva Still Trying to Give Fans What They Want 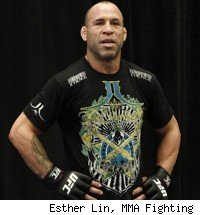 LAS VEGAS -- Wanderlei Silva made his way into the MGM Grand ballroom and went straight to working the ropeline like an experienced politician during Wednesday afternoon's UFC 132 open workouts. The Brazilian slugger has been around long enough by now that he knows what the fans want, and it isn't to see him hit some pads.

Workouts? Sure, it's a nice photo op. But really they want to shake his hand, maybe get an autograph, but mostly they want to see him. They want to feel like they have something of him that they can take home, because no one knows how much longer this ride is going to last.

If you ask Silva, he'll tell you he wants another five years in the sport, maybe ten more fights total.

Silva will turn 35 years old the day after his fight with Chris Leben at UFC 132. Almost 15 of those years have been spent in the fight game, from bare-knuckle Vale Tudo bouts in Brazilian nightclubs to the Saitama Super Arena in Tokyo to his current home in the UFC. It's been a long ride for Silva, and with the way he fights, it's also been a rough one.

More Coverage: UFC 132 Fight Card | Watch UFC 132 Live Online | UFC 132 Results
Despite one recent surgery to repair his injured knee and another to remove some of the copious scar tissue from his face, Silva said he's still feeling healthy a decade and a half into his fight career. He has "regular pains," but nothing serious.

Still, he's suffered progressively frightening knockout losses in three of his last seven bouts, and he's won only two fights in that same span. He might not have come to the end of the road, but he ought to be able to see it from where he's standing now.

This comes with a price, but it's one he's used to paying by now. It would be smart to fight a little safer, for the sake of his health and longevity, if nothing else, but as he put it: "We are not machines. We have a lot of things inside."

And it's not as if his coaches haven't tried to get him to take it easy in there, Silva said. It's just that, well, he's been doing it this way for a little while now. Even he doesn't seem to know whether he's capable of changing.

At the same time, Wanderlei didn't get to be Wanderlei by staying calm. Just like the UFC didn't match him up with fellow slugger Chris Leben because it wanted to see him fight smart and safe.

The fans want what they want, and Silva has always known just how to give it to him. But in giving it to him, he may also be giving up those last few years he hopes to squeeze into an already overflowing body of work.

The question is, can he keep being the same old Wanderlei, and still stick around as the years and the beatings pile up?