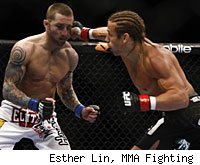 The first bantamweight title fight in UFC history will take place at UFC 132, with Dominick Cruz, the 135-pound champion from World Extreme Cagefighting, set to make his Octagon debut against the only man ever to defeat him, Urijah Faber. That's the headliner on what promises to be a solid top-to-bottom card, and we've got the predictions right here.

When: Saturday, Spike card begins at 8 PM ET and the pay-per-view starts at 9.


Dominick Cruz vs. Urijah Faber
I've agonized over how this fight is going to go, and I've changed my mind about 10 times. There are just so many possibilities.

One possibility -- and it's a possibility not many people even seem to be considering -- is that Faber is just a better fighter than Cruz, matches up well with him, and will beat him handily. That's certainly how it looked the first time these two guys fought: Faber had absolutely no trouble getting Cruz to the ground, sinking in a tight guillotine choke, and forcing Cruz to tap after just 98 seconds of fighting.

Another possibility is that Cruz has improved so much -- and Faber has declined so much -- that Cruz is now far better than Faber. After all, the 25-year-old Cruz looks like he's just entering his prime and has won eight straight fights since losing to Faber. But the 32-year-old Faber looks like he's slowing down, and is just 4-3 in his last seven fights.

The final possibility is that Cruz and Faber are more or less equally matched, and their fight could go any number of ways. Cruz could use his reach advantage and his point-fighting style of striking to keep Faber at bay and win a decision. Faber could use his superior wrestling to take the fight to the ground and win it there. Cruz could surprise us by showing a submission game that has been absent from his past fights. Faber could do something crazy with his dynamic, unpredictable style. Basically, the final possibility is that we should expect the unexpected.

Wanderlei Silva vs. Chris Leben
Silva is returning to the Octagon on the day before his 35th birthday, after almost a year and a half away. We really have no way of knowing if he has anything left: Yes, he beat Michael Bisping in his last fight, but he had lost five of his last six heading into that fight, and now ring rust is going to be a factor.

On the other hand, Leben is nowhere near as talented a fighter as Silva is. Leben is a wild brawler with a fun style to watch, but fighting like that is playing to Silva's strengths -- and Silva does it better than Leben does. I don't think Silva will ever be close to the fighter he was five years ago, but I do think he'll pull this one out.
Pick: Silva

Tito Ortiz vs. Ryan Bader
Speaking of fighters who are past their primes, Ortiz hasn't won a fight since he beat Ken Shamrock in 2006. Ortiz really isn't good enough anymore to be fighting high-quality light heavyweights, but the UFC keeps him around because he has name value, and because Bader is a guy who could use a win over a name opponent. Bader will win, but that win won't tell us much.
Pick: Bader

Carlos Condit vs. Dong Hyun Kim
Condit established himself as a potential welterweight title contender in 2010, with a Fight of the Night win over Rory MacDonald and a Knockout of the Night win over Dan Hardy. Unfortunately for him, I think his streak of victories and his streak of exciting fights is going away against Kim, who has just the right style to take Condit down, control him on the ground and win a fairly dull decision.
Pick: Kim

Dennis Siver vs. Matt Wiman
Three years ago, Siver lost a fight to Melvin Guillard, got cut by the UFC, and looked like he just wasn't good enough to compete at the highest levels. But Siver got back into the UFC in 2009 and has been excellent, winning six of his seven fights. Wiman, who's on a three-fight winning streak, represents a good challenge for Siver, but I think Siver's striking will prove to be too much.
Pick: Siver