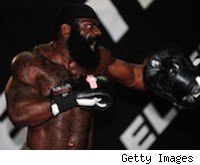 ProElite, the former parent company of EliteXC, will attempt to restart its mixed martial arts business with a return to promoting events. On Wednesday, the company -- now owned by Stratus Media Group Inc. -- announced it will host an event on August 27 in Oahu, Hawaii.

The event will take place at Blaisdell Arena in Waikiki.

ProElite, once the home of Kimbo Slice, had a rapid rise and fall in the mid-to-late 2000s, founded in 2006 as a partnership with Showtime Networks. The company made history in May 2008, when its EliteXC-branded event was broadcast on CBS, making it the first time an MMA event aired on primetime U.S. network television.

Headlined by a Slice vs Jamees Thompson matchup, the event drew an average of 4.3 million viewers, with over 6.5 million tuning in to watch the main event bout. As quickly as it rose though, the company's fortunes sank, buried by mountains of debt.

Its symbolic end came just months after that ground-breaking network breakthrough. On Oct. 4, 2008, Slice was scheduled to take on Ken Shamrock in another CBS broadcast. Shamrock, however, suffered a deep laceration on the day of the fight and was unable to compete. In a pinch, EliteXC replaced him with undercard fighter Seth Petruzelli.

The company had put most of their marketing muscle behind Slice, and when Petruzelli, a true light-heavyweight fighting the heavyweight Slice on short notice, knocked him out in 14 seconds, damage was done. Worse, the day after the fight, Petrzuelli told an Orlando radio show that EliteXC promoters made it "worth my while" to keep the fight standing, essentially asking him to employ a style in which Slice was more capable of being competitive. The backlash to the possible fight manipulation was swift and furious.

Though Florida regulators eventually cleared EliteXC of any wrongdoing, by then it was too late. The day before being cleared, ProElite threw in the towel.

While Slice and to a lesser extent, Petruzelli, have received much of the lion's share of the blame for sinking the company, in reality, financial issues had the company underwater well before that. By the time it ceased operations on Oct. 21, ProElite was $55 million in the red despite existing for less than two years.

In recent months, rumors of a revival swirled, proven true by the Stratus Media Group purchase. Reportedly, ProElite was one of the bidders when Strikeforce went up for sale in late 2010. The company recently hired former Strikeforce matchmaker Rich Chou and former ICON owner T.J. Thompson as executives. The promotion said it plans to announce fighter signings and matchups for the August 27 event in the near future.