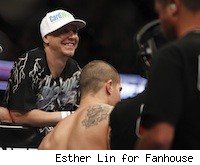 When Trevor Wittman heard the news, all he wanted was to disappear. For years he's worked with Nate Marquardt, honing his striking in Denver's Grudge Training Center, and he went to Pittsburgh with his fighter last week expecting to come home a winner in yet another big UFC fight.

Then on the day of the weigh-ins he found out that Marquardt had been pulled from the fight and fired from the UFC for the elevated testosterone levels that were a result of his hormone replacement therapy, and suddenly Wittman felt like he could barely stand to show his face around colleagues and competitors he's known for years.

"When it hit -- and I know Nate feels the same way -- but I can't tell you the feeling I had at the weigh-ins when this was happening," Wittman said. "I really felt like I wanted to go and put a hood over my head and walk out of there. There were spots where I was pushing myself to go back in the room and not answer calls from the press. I had to hide in the bushes, basically, all out of respect for Nate."

But using testosterone injections to artificially raise hormone levels from whatever point they're at in a person's body? That, Wittman said, is something he can't support even when the levels are dropping naturally and legitimately.

"If you have a 21-year-old come into this with those naturally high testosterone levels, and then you've got an older fighter -- I'll just pick an age, say, 35 -- who has lower testosterone levels, the advantages of the older man are knowledge, experience. He's seen it in all different aspects. He's a veteran. To me, that's a huge disadvantage for the younger man. Yeah, he's going to be able to go, go, go. But that's his advantage. Let him have it. And let's outwork him. Let's beat him with our experience. But if we make a 35 or 40-year-old fighter as strong as a 21-year-old, to me, that's cutting corners."

In the case of Marquardt, Wittman knew his fighter was undergoing testosterone treatments. He didn't agree with it, he said, but he also didn't feel like it was his place to tell a veteran fighter how to conduct his career.

What's more, even though he felt like the testosterone use shouldn't have been allowed, technically -- at least if Marquardt could provide proof of his need for it and get his levels down to within a range acceptable by the commissions before each fight -- it was. Marquardt was attempting to follow the rules laid out by the commissions, Wittman said. That's why, in Marquardt's mind, it wasn't cheating at all.

"Nate Marquardt is a guy who's never been untruthful with me. Everything that he tells me, and everything he told me going into this fight and back before New Jersey, it's something that he truly believes in. He went and had his testosterone checked. And when I spoke to him about it, I could tell he really believes he'd done the right thing, because the doctors are telling him, 'Your levels are low. You need this. This is why you're tired. We'll give you this and you'll perform like you're young again.' Man, you start telling a guy that, he's going to believe you.

"His honesty from the beginning -- doing these tests, asking for permission to do this -- that's what hurt him. His honesty got him put in this situation. It's so hard to watch one of the most honest guys I've ever trained -- the biggest family man, the guy who signs every autograph -- get scolded and cut and lose his career and get this brand on him, all because he felt like he was doing the right thing."

Now Wittman's fear is that the "brand" is not just on Marquardt, but also on his gym. He's never advocated use of hormone replacement therapy, he said, but by not doing more to dissuade his fighters from it, he can't help but wonder if he's not complicit in it.

"I didn't get into it. I kind of put my earplugs in," Wittman said. "I look at it as white and black, like you're still doing an enhancing kind of thing. But if the doctor okays it, does that make it right? I don't know. That's something I can't explain, but I'll tell you what I'm doing now, and that's sit down with every fighter I deal with and find out if they're seeing a doctor and for what reason. If it's anything that has to do with enhancing, then I'm going to step away."

Maybe the worst part, according to Wittman, is that as far as he can tell, the hormones and injections don't make that much of a difference on fight night. He thinks it's more of a mental aid than a physical one, he said, and when he sees fighters trying to become experts at it, he can't help but think back to boxer Verno Phillips, who used to drop weight by eating two mangoes a day.

At the end of the day, Wittman said, you still have to fight the fight, and a few nanograms per deciliter of testosterone rarely has the final say on the outcome.