Melvin Guillard a Future Professional Golfer? Sure, Why Not 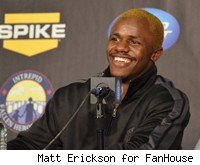 LAS VEGAS -- Melvin Guillard has his own way of doing things. Even normal things -- simple things, at least in the world of pro fighting -- quickly become a canvas for him to work on. Take Wednesday afternoon's UFC 132 open workouts, for instance.

Before stepping on the mats to show off his skills for media and fans, Guillard first stripped down to his underwear so that he could be lathered head to toe in...something. As he stood there in a ballroom at the MGM Grand with his eyes closed and arms out wide, getting oiled up in the middle of the afternoon as if there weren't a room full of strangers gawking at him, it was plain to see that this was not a man who spends all that much time worrying what people think about him.

If he was, he probably wouldn't have mentioned to reporters that his plans after he retires from professional fighting include playing on the PGA tour. As in, the golf one. And no, he's not joking.

"People laugh at me all the time," said Guillard, who claimed that, despite only playing golf for about a year, he now shoots in the 80s. "If y'all see my golf game you wouldn't be laughing, because I will smoke y'all out there."

Confidence, in case you couldn't already tell, is something Guillard has never lacked. He had it on season two of The Ultimate Fighter, back when he had more raw talent than polish. He had it through his up-and-down years after the show, when he'd mix flashes of fighting brilliance with almost pathologically self-sabotaging acts both in and out of the cage.

Now he finally seems to have pulled it all together, and with his current four-fight win streak comes a matching ego. So what if he's fighting Shane Roller on the Spike TV prelims of this card, and right after what would seem to be a much more high profile win over Evan Dunham in January? Regardless of where he may be in the pecking order at any given time, Guillard still has no problem declaring himself the best lightweight in the world.

"I can sit here and say that from my heart and from my soul," he said. "I know I'm the best 155er. I know when guys are scheduled to fight me, I know they don't want that fight. A lot of times, their managers probably go other routes of wanting to fight other guys. I'm the one guy that fighters right now don't want to fight, because this is my time. I'm at the peak of my career, and I'm not even in my prime yet. I just hit 28. I still haven't gotten old man strength yet. Right now, every fight's going to be tough, and I'm not knocking any fighter in my weight class, but I'm one tough dude, man. I've taken my beatings. I've taken my lashes. I've been knocked down. And I'll be damned if I'll let anybody knock me down again in my life."

But the fact that Guillard thinks so highly of his own skills only makes it more perplexing that he's one of the few UFC lightweights on a win streak who isn't clamoring for a title shot every time the mic gets passed his way. Not that he'd mind one, of course, but he admitted that he's almost purposely put those aspirations aside for the moment.

Instead, his focus is simple: he just wants to stick around.

"You see a lot of guys come and go," Guillard said. "They get cut all the time. I think a lot of guys are worried too much about title fights and winning belts. I care more about keeping my job and always being able to give you guys great fights. I always ask myself, how would I feel if a kid walked up to me and said, 'Hey when's your next fight in the UFC?' and I'm not in the UFC anymore. That's kind of heartbreaking as a person. You feel like a failure. I try my hardest to not worry about the hype and title fights and rankings. I just want to keep fighting, bring you guys great fights, and I treat every fight like a title fight."

Fighting a guy like Roller -- who was a good-but-not-great WEC lightweight before debuting in the UFC with a knockout of Thiago Tavares -- may not be the kind of fight that vaults a guy immediately into the title picture. It might even be a bout where he has more to lose than to gain.

But Guillard? He just wants to fight and keep fighting as often as possible, he said. Other people may worry about getting the title shot as soon as possible, but he isn't like other people.

Then again, most of us already knew that.