Charles Oliveira's Win Over Nik Lentz Changed to No Contest 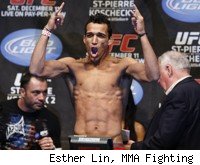 The result of Charles Oliveira vs. Nik Lentz is now officially a no contest.

The Pennsylvania state athletic commission on Wednesday determined that an illegal knee by Oliveira set up his submission win at this past Sunday's UFC on Versus 4 in Pittsburgh.

"After review of the tape of this contest and after consultation with the referee the Pennsylvania State Athletic Commission has ruled that the results of this match will be changed to a no-contest," Executive Director Gregory Sirb said in a statement provided to MMAFighting.com. "This change is a direct result from an accidental kick to the head by Mr. Oliveira to a grounded Mr. Lentz."

In the second round of the preliminary lightweight fight, Oliveira landed a knee to the head of a grounded Lentz and proceeded to tap out Lentz with a rear-naked choke at one minute and 48 seconds. The knee, while accidental, was clearly illegal and noticed by the live audience watching and the UFC commentators. However, there was no call from the one person who could have made a difference that night, the referee.

"All the other referees were jumping up, guys from the commission were jumping up, I was jumping up. A lot of people were wondering what was going on, why the fight wasn't being stopped, because it was so blatant," Lentz's coach Greg Nelson told MMAFighting.com Tuesday, adding that Lentz suffered an injury to his eye socket due to the knee.

Despite the controversial finish, the match was exciting enough that it was awarded Fight of the Night by the UFC and both fighters walked away each with a $50,000 bonus.

With the result change, Lentz (21-3-2) remains undefeated in his UFC run with five wins, a draw and a no contest. Meanwhile, Oliveira (14-1) will have to try again to bounce back from the first loss of his career last December against Jim Miller.