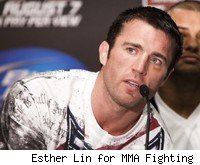 Chael Sonnen, the UFC middleweight who has been serving a suspension from the California State Athletic Commission since his loss to Anderson Silva in August of 2010, is now free to apply for a license to fight in California or any other state.

Although there were initial reports after Sonnen failed to get re-licensed by the California Commission last month that he would be ineligible to apply for a license again until May 2012, the Commission later released a statement saying those reports were based on a misunderstanding of the rule in question. In reality, Sonnen can re-apply now. Dodd said he doesn't know if Sonnen will re-apply in California, but California would have no objection to Sonnen applying for a license elsewhere.

"I don't know if Chael plans on reapplying." Dodd said, adding that if he applies elsewhere, "It would be up to that commission or licensing agency."

Sonnen was initially suspended for failing to properly disclose his use of testosterone-replacement therapy, and California declined to re-license him at last month's hearing. But Sonnen posted a message on Twitter early Wednesday morning indicating that he's ready to get back to fighting. Dodd said he doesn't know whether that's true or not as far as any state athletic commissions are concerned.

"He's back as far as he may be able to get licensed in other states," Dodd said. "Whether he's back is up to each individual organization to license him. I guess if he says he's back he's probably back into training, but I don't know if he's been licensed in any other state."

Sonnen indicated at his most recent hearing before the California Commission that he viewed a failure to get re-licensed as career-ending, but Dodd said that's not true.

Asked for any other thoughts about Sonnen, Dodd said that as far as he's concerned, Sonnen's appearance before the Commission at last month's hearing speaks for itself.

"It was put out there," Dodd said. "We held the meeting in the open, reporters will report what was said and there's nothing I can add."