UFC on Versus 4 Medical Suspensions: Pat Barry, Nik Lentz Shut Down for 60 Days 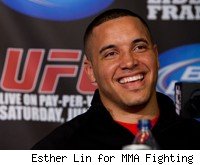 Five fighters from Sunday's UFC on Versus 4 card in Pittsburgh have been hit with medical suspensions following their fights, three of them for 60 days.

Most notably, main event heavyweight Pat Barry was suspended for 60 days and will need clearance from a neurologist before returning. Barry looked to be on his way to a win over Cheick Kongo after dropping him twice, and it looked as if referee Dan Miragliotta was close to stopping the fight.

But Kongo rallied back, still wobbly on his feet, and delivered a massive right hand that put Barry on his back. Kongo's win is already being discussed as one of the greatest comebacks in UFC history.

And the damage he took from an illegal knee by Charles Oliveira will have Nik Lentz out for 60 days, as well. He also must have his right eye cleared before returning. Lentz said Monday on Twitter that he had broken bones around his eye that will likely require surgery, and his coach, Greg Nelson, told MMA Fighting on Tuesday his fighter has a broken eye socket.

After an exciting first round – one that led to a Fight of the Night bonus – Lentz took a knee to the head in the second that the referee didn't see. Lentz's right knee was grounded, and Oliveira went on soon after to secure a fight-ending rear naked choke. The PSAC has confirmed the result of the fight is under review. It is possible Oliveira's win could be overturned to a no contest.

And Christian Morecraft, who ate a three-punch combination from Matt Mitrione that knocked him cold, also was hit with a 60-day suspension. The win by Mitrione, who will appear on Tuesday's edition of "The MMA Hour" to talk about the fight with host Ariel Helwani, improved his record to 5-0 in the UFC with four wins by TKO or knockout.

None of the fighters involved in unanimous decisions were issued suspensions, and only one fighter involved in a stoppage loss was spared a suspension – Curt Warburton. Warburton tapped to a kimura just 1:58 into the first round against Joe Lauzon, and it appeared that his right arm might be damaged. But Warburton said Monday on Twitter that his arm and shoulder were OK after the fight.