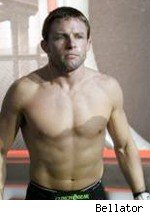 Apparently not satisfied with one title, Bellator featherweight champion Joe Warren is also setting his sights on the bantamweight belt, as well.

Bellator announced Tuesday its pairings for its Season 5 eight-man bantamweight tournament, which will begin in September. Right smack in the middle will be Warren, who will drop down a class to go after a second title. And joining him in dropping down from 145 pounds to 135 will be the man he beat to win the featherweight belt, Joe Soto.

The tournament will open on Sept. 24 with all four quarterfinal fights. That event is likely to be Bellator 51; no venue has yet been announced. Bellator's fifth season will open on Sept. 10 with Bellator 49, and events will again be broadcast on MTV2. Bellator's current bantamweight champion, Zach Makovsky, will defend his title against the tournament winner, likely in the spring of 2012.

"To say our Season 5 bantamweight tournament is stacked is a gross understatement," Bellator CEO Bjorn Rebney said in a release from the promotion. "Warren-Vila is going to be absolutely explosive for as long as it lasts, and the inclusion of Dantas, Nogueira, Chase, Soto, Ed and Luis makes every single fight in this tournament a pick'em adventure."

Warren (7-1, 5-0 Bellator) is scheduled to face Patricio Freire next month to defend his featherweight title. The NCAA Division I All-American wrestler also won two state wrestling titles in high school. Warren's MMA debut was an upset of Beebe in the Dream featherweight grand prix in 2009. Vila (9-0), who trains at American Top Team, won a bronze medal in the 1996 Olympics. He will be the oldest competitor in the field at 40. Only one of his nine wins has gone the distance – Vila owns six knockout wins and a pair of submissions.

Soto (9-1, 4-1 Bellator) in September suffered his first career loss, a second-round TKO to Warren, dropping his featherweight title. Soto has been with Bellator since its first event in April 2009 and won the promotion's first 145-pound title with a submission of Yahir Reyes. He is scheduled to next fight Eddie Yagin at a Tachi Palace Fights event in August. Dantas (10-2) is a product of the Brazliian jiu-jitsu team at Nova Uniao. His Bellator debut also will be his debut in the United States.

Beebe (18-7, 1-0 Bellator) started his MMA career 12-1. His WEC debut was a unanimous decision win over Eddie Wineland to win the bantamweight title in March 2007. He defended it once against Rani Yahya before losing it to Miguel Torres in February 2008. That started a stretch of five straight losses, his loss to Warren at Dream 7. But since 2010, Beebe has gone 6-1, including a win in his Bellator debut in May. He is scheduled to face Ralph Acosta for the World Fighting Championship's bantamweight title next month in England. Galvao (9-4-1, 0-1 Bellator) is a WEC vet whose last fight was a unanimous decision loss to Warren at Bellator 41 in April. In December, he won Ring of Combat's featherweight title. He, like, Dantas, is a Nova Uniao Brazilian jiu-jitsu product.

West (16-5, 2-1 Bellator) will be looking to get back to the finals after reaching the championship bout of Bellator's Season 3 135-pound tourney, which he lost to Makovsky by unanimous decision. The Tucson, Ariz.-based West, who trains frequently with UFC fighter George Roop, is 8-1 over the last four years, including five submission victories. Nogueira (11-1, 1-0 Bellator) has won seven straight, including his Bellator debut against Jerod Spoon in April. His only career loss came against Dantas at a Shooto Brazil event in 2008.