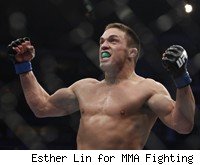 A pair of Jakes will battle on the bayou in September.

Shields (26-5-1, 1-1 UFC) is coming off his first loss in in six and a half years, a unanimous decision setback to welterweight champion Georges St-Pierre at UFC 129 in April. Ellenberger (25-5, 4-1 UFC) fought on the same card, knocking out Sean Pierson in the first round for his fourth straight victory.

Fight Night 25 will be the UFC's first trip to New Orleans in more than a decade. In April, the promotion announced a renewed sponsorship deal with Bud Light, and as part of the deal the two companies will produce an annual live event.

The first joint venture, "Battle on the Bayou," will take place at the Ernest N. Morial Convention Center and is expected to include fan expo-like events, a concert tie-in and meet-and-greets with Zuffa fighters. As with all UFC Fight Night cards, Fight Night 25's main card will air live on Spike TV.

The UFC has held three shows in New Orleans, all prior to Zuffa's purchase of the company in 2001. The last UFC show in Louisiana was UFC 37 in May 2002 in Bossier City, near Shreveport. Several UFC fighters hail from the New Orleans area, most notably Pat Barry, Melvin Guillard and Alan Belcher, who trains in nearby Biloxi, Miss.