Charlie Brenneman: 'It Was Quite a Rollercoaster' 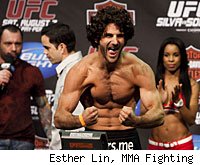 Within a span of five days, Charlie Brenneman experienced the self-described feeling of devastation upon learning of his preliminary fight cancellation to the joy of beating a top 10 welterweight in his live television debut.

On an appearance Tuesday on MMAFighting.com's The MMA Hour, Brenneman detailed this past weekend's UFC on Versus 4 "rollercoaster" ride in Pittsburgh, one that should limit the teasing from fans for his lower standing within the UFC.

"I can proudly say, after this weekend, [Dana White] knows who I am," Brenneman said.

Last Wednesday, Brenneman received the unfortunate news of his scheduled opponent T.J. Grant suffering a case of mono that put their welterweight bout on the shelf. But for some reason, Brenneman was told by matchmaker Joe Silva to stay on weight to earn his show money. Looking back, Brenneman says he doesn't know if he was positioned then as a potential reserve.

"I thought [Silva] was making me do it to do it," Brenneman said. "... I was grumpy. I was very upset with the situation."

Following orders, Brenneman continued to cut weight and even doing so in proximity with the fighter he would end up replacing, Nate Marquardt.

By Friday, Brenneman was informed of the possibility he would fight Rick Story and by then Brenneman said he was able to stay level-headed after having already gone through tremendous stress.

"I had high highs and low-lows in the last 48 hours," Brenneman recalled. "I wouldn't have been surprised by anything."

Brenneman was not without possessing a hint of anxiety, however, having to repeatedly ask his team if the fight with Story would actually happen. Still, Brenneman was aware harassing the UFC with questions wasn't going to help.

Then on around 3:15 to 3:20 p.m. the day of the weigh-ins Saturday, Brenneman received the official green light. At that point, Brenneman's name still wasn't on the call sheet to show up for the weigh-ins and had to speak with UFC coordinator Burt Watson to find out which bus to take in order to attend the weigh-ins.

It was an opportunity of a lifetime for Brenneman. But on the other side, he was stepping into a spot taken away from someone else. Brenneman and his camp did their best to be respectful when approaching Marquardt and Brenneman initially wanted to offer his sympathy, eventually holding back.

"I didn't know if he wanted anything to do with me," Brenneman said. "I felt for him."

Brenneman was a huge underdog heading into the fight against Story, but after three rounds, his wrestling prowess became the factor on the scorecards. On scores of 29-28 three times, Brenneman earned the biggest win in his career in front of a supportive hometown crowd.

And from that point on, not only is White well aware of who Brenneman is, Brenneman might become a regular on the "main cards."

"Hopefully my next fight you're going to see me at this time on this channel," Brenneman said.