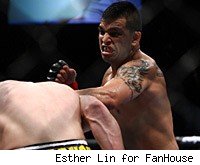 The Ultimate Fighter 8 winner Efrain Escudero will head across the pond on Sept. 10 to fight Tim Radcliffe at BAMMA 7 at the National Indoor Arena in Birmingham, the promotion announced Monday, along with lightweight title bout Rob Sinclair vs. Leonardo Santos and welterweight matchup Matt Ewin vs. Valentino Petrescu.

BAMMA 7 is the follow-up to the May 21 event at the Wembley Arena, which featured Frank Trigg, Ivan Salaverry and what turned out to be the retirement fight for Murilo "Ninja" Rua.

Last September, Escudero (16-3) became the second The Ultimate Fighter winner to be handed his release (Travis Lutter was first) after losing to Charles Oliveira at UFC Fight Night 22. The 25-year-old lightweight won three straight following his release before suffering a loss last month against Fabricio Camoes at Tachi Palace Fights 9. Radcliffe (11-4) won both his fights this year against Michael Pastou and Alexandre Izidro and holds six submission victories.

Sinclair (9-2) will be making his second defense of his BAMMA lightweight strap when he faces Sengoku veteran Santos (9-3). In March, Sinclair took a fight with another British promotion, OMMAC, and scored a TKO over Martin Begley. With the crumbling of the Sengoku promotion, Santos debuted for BAMMA in May and defeated Jason Ball via unanimous decision.