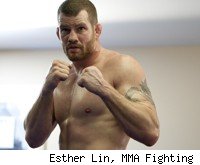 Nate Marquardt remains on suspension from the state of Pennsylvania after failing to receive medical clearance prior to the weekend's UFC on Versus event. In the aftermath of the shocking development, which included Marquardt's firing from the promotion, many questions have arisen.

Which part of the medical review did Marquardt fail to clear? How did six weeks go by without a resolution? And how did Pennsylvania suspend Marquardt when it appeared he'd never been licensed in the first place?

While most of the situation is still shrouded in mystery, at least one of those questions can be answered.

Gregory Sirb, the executive director of the state's athletic commission told MMA Fighting on Monday that Marquardt had indeed been granted a license to fight, pending medical clearance.

"He was licensed. He completed all his paperwork for licensing probably a week before," Sirb said.

But Sirb said that regardless of whether or not the license had been granted, Marquardt would have faced the same possible outcome for failing to clear his medical issue.

"He knew full well what the ramifications were, whether licensed or not," Sirb said. Sirb told reporters on Sunday that Marquardt had six weeks to resolve an outstanding issue, but would not divulge what it was. Neither would UFC president Dana White. Sirb has also said that Marquardt will be taken off suspension once he clears the issue.
More Coverage: Dana White Tells Nate Marquardt to 'Man Up'
According to the commission's website, while in the course of applying for a license, a professional fighter must provide a negative HIV, Hepatits C and Hepatitis B surface antigen exam. They must also provide the results of an annual medical exam. That exam is wide-ranging and covers potential issues related to vision, lungs, heart rate, the nervous system, coordination and more that could disqualify a fighter from competition. In addition, there is language in the regulations that offers the commission the latitude to request other exams. The stated medical requirements are similar to those of other states, including fight hubs Nevada and New Jersey.

All of the aforementioned test results are considered the fighter's private medical information and kept confidential under federal HIPAA laws. Federal or Pennsylvania state law does not, however, prohibit disclosure of a positive drug test result, nor the type of drug which led to a confirmed positive test.

Sirb confirmed that if Marquardt had failed a drug test, the commission would have released those findings.

To date, Marquardt and his team have said little regarding the situation. On Saturday, his team released a statement to MMA Fighting which read, "I was looking forward to my welterweight debut. I'm sorry I let everyone down." On Sunday, he tweeted, "I'm sorry to all my fans and the UFC for not passing the medicals for tonight's fight. I'm heart broken I couldn't fight, but I will b (sic) back."

Marquardt is expected to make his first extended statements about the matter on Tuesday's edition of The MMA Hour, which airs at 1 pm on MMAFighting.com.