Konrad vs. Buentello, Rodriguez vs. Petruzelli Added to Bellator 48 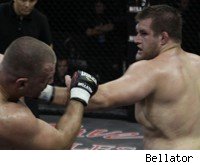 Bellator has lined up two heavyweight matchups, Cole Konrad vs. Paul Buentello and Ricco Rodriguez vs. Seth Petruzelli, for Bellator 48 on Aug. 20 at the Mohegan Sun Arena in Uncasville, Conn.

Bellator 48 will be the third and final 2011 Summer Series events and is expected to feature the finals of the featherweight tournament which kicked off this past Saturday.

The Konrad vs. Buentello non-title fight was originally announced for Bellator 42 in April, but Buentello would later withdraw due to a back injury. Konrad, who won all seven of his fights in 2010 en route to becoming the Bellator heavyweight champion, will be fighting for the first time this year.

Rodriguez and Petruzelli will both be making their Bellator debuts. Although Bellator is billing this as a heavyweight bout, the agreed upon catchweight is 230 pounds, according to Petruzelli. Petruzelli was released from the UFC after his loss at UFC 122 last November and scored a TKO this year at WEF 46 in April. Never fighting for the same promotion in a row, Rodriguez has won his last 11 fights.