UFC on Versus 4 Undercard Live Blog: Gamburyan vs. Griffin, More 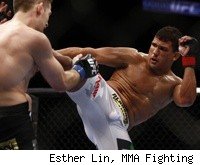 This is the UFC on Versus 4 live blog for the preliminary bouts on tonight's UFC Live event at the CONSOL Energy Center in Pittsburgh.

Round 1: Faaloloto and Johnson touch gloves and we're underway. After an exchange, the two clinch against the cage. Johnson digs low and puts Faaloloto on his back. Faaloloto back to his feet quickly. Johnson with a nice kick to the body. Faaloloto is working on Johnson's legs with hard kicks. Both kick at the same time, and off-balance, they both fall down. Faaloloto closes the distance but Johnson takes him down with 1:30 left. Johnson works him over with punches from the top, but Faaloloto creates space and gets back up. Johnson bulls Faaloloto in a clinch and lands knees to the body, then elbows. Faaloloto falls to the ground, Johnson follows up with ground and pound for the finish with time running low.

Round 1: Lamas leading the standup by taking the center of the cage. Lamas goes low for the takedown but Grice keeps his balance. Lamas continues to hold on to the single but Grice holds him off for a while longer. Eventually, Lamas takes him down. Plenty of time to work. Lamas moves to side control near the cage as we head under the two-minute mark. Grice tries an arm bar but Lamas steps over and out of trouble. They're back on their feet with 90 seconds left. Lamas crushes Grices with a head kick with just :45 to go. Grice somehow stays on his feet but he's in la-la land. Lamas follows up with more strikes until the ref steps in to halt Grice, no longer defending himself with any clarity.

Round 1: Oliveira comes out with a kick. Lentz closes distance and takes him down quickly. He stands up in Oliveira's guard and eats a kick. Oliveria stays on his back, tries to sweep from half-guard. Lentz keeps his position though. Oliveira back to his feet. Lentz tries another takedown, this time Oliveira stays on his feet. Oliveira starts to land. He's keeping a fast pace throughout. Oliveira drops Lentz. He hammers him with a punch from the top. Oliveira locks on an anaconda choke from the top, then transitions it into a guillotine. Lentz pulls out. Lentz tries a guillotine of his own. He's on top. Oliveira looks like he's OK. Oliveira hammers Lentz with a knee to the head. He them throws him to the ground and gets full mount with 14 seconds left. Big elbows from the top. Wild round, Oliveira 10-9.

Round 2: Oliveira on top early. Lentz trying an arm-in guillotine, but he's got no chance of finishing it. Oliveira hit Lentz with a knee while he may have been down. The ref lets the action continue. Oliveira with more offense. Another knee, then Lentz goes down. Oliveira takes his back and finishes with the rear naked choke. The replay showed that Lentz had one knee on the mat when Oliveira hit him with a knee. It was illegal, but Oliveira will still be announced as the winner, and Lentz will probably have to appeal the decision.

Round 1: Roberts walking forward with purpose, opens with a body kick. Attonito is making his welterweight debut and looks comfortable. Attonito slowly moving forward now, tags Roberts with a left hook. Roberts ducks under a right and shoots in. Atttonito easily defends the takedown try. Attonito looks generally unconcerned with Roberts' standup skills. Attonito pushes him up against the cage and grabs a leg, but Roberts stays on his feet. Roberts tries a jumping knee but Attonito is unbothered. After a scramble, Attonito ends up on top. Roberts defends well. Close round, Attonito 10-9.

Round 2: Roberts comes out with a takedown try. He drags him down for a second but Attonito powers up. Roberts is on his back though, and drags him down again. He's got the hooks in with an eternity to work the position. As he tried a rear naked choke, Attonito works free and ends up on top. Attonito with body punches from the top. Then he attacks the body and head. Attonito grinding out points here with Roberts' head up against the cage. Attonito rides out the rest of the round from the position. Round goes to him, 10-9.

Round 1: Warburton looking to establish his striking superiority early. He is landing early and often. Lauzon looked to be having trouble finding the distance and all of the sudden he floors Warburton with a left hook. Lauzon turns it on with ground and pound. Then he looks for a submission. He works a kimura and has it in deep. Warburton holds him off for a second, but Lauzon yanks it further and Warburton has to tap out.

Round 1: Stevenson wades in with nothing planned and Vazquez immediately takes him down. Stevenson tries an arm bar from the bottom. Vazquez works free and is still on top, in Stevenson's half-guard. Stevenson ties him up for a long period of time and the ref restarts them standing. Stevenson looks the crisper of the two standing. Vazquez backs Stevenson near the cage and uses a single leg to take him down, with 1:20 to go. This was a standoff of a round. Vazquez got two takedowns but they led to nothing. Stevenson got the better of the striking but it was negligible. 10-10.

Round 2: Stevenson lands his best punch of the fight one minute in with a left hook. Vazquez finds his mark with a straight left. Stevenson changes levels for the single leg takedown. Vazquez counters by grabbing his neck for the guillotine. Vazquez has it close. Stevenson looks in trouble for a moment but breaks Vazquez's grip. Vazquez scores a takedown with 90 seconds left. He takes Stevenson's back momentarily but Stevenson escapes. A more definitive round goes to Vazquez, 10-9.

Round 3: Slow pace to start the round. Vazquez measuring from the outside, Stevenson looking like he wants to counter off something. Vazquez with a series of jabs. Stevenson said he was going to fight angry in this fight. We're not seeing it. He's probably fighting for his UFC career but he doesn't seem to have a sense of urgency. Stevenson lands a combo as we near the one-minute mark. Nothing behind it though. Vazquez keeps pawing out the right jab with an occasional straight right behind it. Stevenson starts moving forward now. Vazquez appears to be tiring. This was a close round, too but Vazquez seemed to land more accurately, so 10-9 for him.

Round: 1: Big leg kicks early for Griffin. Gamburyan drives in for the takedown and gets it. Griffin back to his feet against the fence. Gamburyan tries to get a guillotine hold, Griffin breaks it. Griffin with a knee to the body. Gamburyan throws him to the mat. Griffin up quickly but Gamburyan takes his back looking for a choke. Griffin shakes him off. Griffin tries to take him down, Gamburyan wards him off. Another close first round, this one goes to Gamburyan, 10-9.

Round 2: Gamburyan with a couple of heavy rights early, one lands. Griffin shakes his head as though it didn't bother him. Griffin going back to the leg kicks, and they start landing heavy. Body kick now. Griffin is moving into stalking mode. Looks like he found his range. And just as I type that, an errant Griffin knee lands low, causing a timeout. Gamburyan keeps circling with his back a few feet from the cage, giving Griffin good angles. His kicks keep landing. A second low blow causes another timeout. Round goes to Griffin, 10-9.

Round 3: Gamburyan loses his footing early. A scramble ensues but neither ends up in an advantageous position. Big slam takedown by Gamburyan halfway through the round, but Griffin pops back to his feet. Gamburyan makes a mistake and Griffin ends up on his back and lands several punches. Gamburyan escapes the mess. The round is turning into a grind for position. We head under one minute left. Griffin with a nice knee to the body, then a leg kick. Body kick by Griffin. Gamburyan catches it and tries to take him down to no avail. Gamburyan trying several takedowns at the end. Griffin counters with a guillotine but Gamburyan pulls free. They're in the middle of a scramble as the round ends. It's 10-9 Griffin on my scorecard.